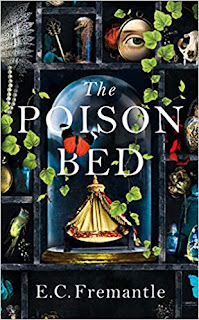 In 1615, Frances Howard and her husband Robert Carr, are imprisoned separately in the Tower of London, accused of poisoning Sir Thomas Overbury. In alternating chapters, they tell the reader what led up to this.


Frances and Robert fall in love, which, given that Frances is married and Robert is King James I favorite and lover, is not a smart or safe thing. But Robert feels James will forgive him anything, while Frances figures on getting her marriage annulled on grounds that it was never consummated- even though she’s been married several years. But her husband is willing to go along with it, just to be rid of her. One person who stands in the way of the annulment is Overbury- he, too, is in love with Robert, and things he’s making a mistake.


Was the killer Frances or Robert? Or was it someone else? Or, even, just a death from illness, as was so common back then?


While some aspects of this story were fascinating, I had a hard time being knocked out by the book. This is because I had a hard time liking anyone in the story! Robert is shown as not being overly bright. Frances was manipulative and self-centered- although the way the book was written, I felt she was manipulated in term, by someone better at it than she was. So, despite the wonderful descriptions in the text, and the marvelous cover, I can only give it three and a half stars.
Posted by Laurie Brown at 6:30 PM