Sparks of Light, by Janet B. Taylor. Houghton Mifflin Harcourt, 2017 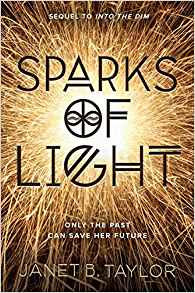 I can’t make my mind up about this book. On one hand, some parts- like the part in the mental hospital- are very good, intense, and frightening. You can feel what kind of despair that the women in asylums back then would have felt- they may not have had evil time traveling doctors, but the treatments were just as bad. Other parts, like the amount of time spent dealing with clothing, are kind of given too much time and break the mood. Of course, the girls *are* teenagers, so being excited over clothes would be normal. But it really kills the tense mood.

I didn’t realize that this book was the second of a series when I got it, so I was a little lost about the situation. It got filled in pretty well through the book, though, so I wasn’t completely lost, but it took me a while to get my bearings.

Hope, brought up in isolation, now has a family. They are teenaged time travelers living in Scotland. Her mother has been rescued from the Middle Ages, where she was stranded, and is now suffering from PTSD. Hope has a boyfriend for the first time in her life- well, it’s the first time she has friends of any kind. She’s still getting the hang of this family and friends thing, so she has bouts of jealousy that show her immature side, but she’s doing her best.

The group’s mission is to go back to Gilded Age New York, and steal or destroy a device that, if it fell into the hands of a rival group of time travelers, could allow them to change the time line- something that Hope’s group strives to avoid. This involves the mental hospital event, a grand ball at the Vanderbilt’s, and meetings with Nikola Tesla, Thomas Edison, and the unhappy Consuelo Vanderbilt among others. There are lots of frantic carriage rides, intense reunions, and one extremely sad event. It’s a good book, I think, but it really needed an editor. Four stars out of five.

I received this book free in exchange for an unbiased review.

Neither of these things influenced my review.
Posted by Laurie Brown at 12:51 PM 1 comment:

This novella- 164 pages, I read it in an hour- is not what I expected from Stephen King. It’s not horror at all; it’s more of a parable or even just a profile of a character.

In the summer of 1974, 12 year old Gwendy runs up the Suicide Stairs every day. She is bullied at school for being overweight, and is determined to lose weight before starting middle school. One day when she comes to the top, there is a man sitting on a bench, who wants to talk to her. Despite knowing not to talk to strangers, she is lured into conversation, and he gives her a box with buttons on it (not a box of shirt buttons, as I had assumed). Some of the buttons stand for the continents (Asia, Africa, etc) and will cause a destructive incident. The red one takes out whatever she is thinking about, while the black one will cause world annihilation. Then there are two levers on the ends; one causes the box to decant a small chocolate candy that makes a person feel wonderful, want to eat only healthy food, and causes them to become thin, an ace at sports, and a straight A student. The other decants an antique silver dollar worth several hundred dollars. This is a test; Gwendy is to be the box’s caretaker and see how she deals with its power.

Despite being the queen bee at school, Gwendy never bullies, although she does slowly dump her best friend. Her life is not completely perfect; the school bully hates her because she is no longer someone he can make fun of (he used to call her ‘Goodyear’ as in ‘blimp’).

The story takes us from that incident when she is 12 until she is 22. You would think that a story of a teenager with a doomsday box would have a lot of tension and possibly horror to it, but you’d be wrong. Frankly, when I got to the end my reaction was “What??” because there was just so little drama and no real horror. Three stars. 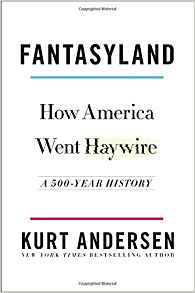 Neither of these things influenced my review.
Posted by Laurie Brown at 2:42 PM 1 comment:

Email ThisBlogThis!Share to TwitterShare to FacebookShare to Pinterest
Labels: American history, American sociology, history, nonfiction, sociology
Newer Posts Older Posts Home
Subscribe to: Posts (Atom)
I read voraciously.I'm an Amazon Vine reviewer, so I get some pre-release books from them. I also occasionally get early reviewer books from Good Reads or Library Thing. I take huge numbers of books home from the library, and buy used ones from the Friends of the Library book sale, yard sales, and thrift stores. This means that not all the books I review are new ones; some are hot off the press, many are older- occasionally very old.