The Pinks: The First Women Detectives, Operatives, and Spies With the Pinkerton National Detective Agency, by Chris Enss. Twodot, 2017 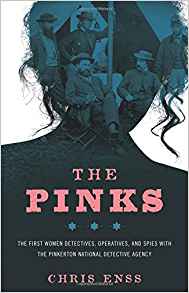 In 1856, barely six years after starting his eponymous agency, Allan Pinkerton hired the first woman operative, Kate Warne. She basically walked into his office and told him that he needed her; turns out, he did. Several of the chapters are about her cases; some feature other ‘Pinks’, while some are about female spies who were not on the payroll. One was even a spy for the Confederacy side during the Civil War, whereas the Pinkerton company was working for the Union government. The stories are less of detecting than of spying; the female operatives were able to strike up friendships with the wives of rebel higher ups and even get themselves invited to stay in their homes. Apparently, at that time, no one expected a woman to be anything but a pretty face with no brain. They were able to overhear rebel plans and even be taken to observe the latest in Confederacy weaponry, including the Merrimack. My favorite section was the one where Warne escorted a disguised Lincoln to his inauguration – he had to go through the heart of rebel sentiment.

We don’t get to find out anything about the agents other than the bare bones; the stories are told in plain language with no frills. Each chapter is quite short; some are filled out with facts about the Civil War, for instance, there is a section all about the Monitor and the Merrimack and the experiments with early submarines.

I actually would have expected it to be in the Young Adult section of a library. Inspiring stories for girls with a side of making historical facts go down easily. Three stars out of five.

I received this book free from the Amazon Prime program in exchange for an unbiased review.

Neither of these things influenced my opinion.
Posted by Laurie Brown at 4:58 PM