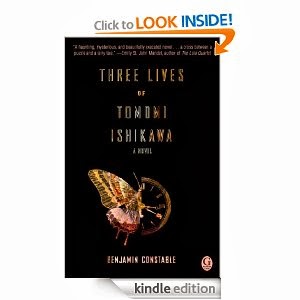 I’m not entirely sure how to review this novel. It’s told from the point of view of Benjamin Constable- yes, the author’s name but this is supposed to be work of fiction. Benjamin’s best friend, Tomomi ‘Butterfly’ Ishikawa, disappears and leaves him a note: she has committed suicide. But her note sends him on a game of treasure hunt all around Paris and then on to New York City, leaving parts of her journal in hidden places. It’s like a mad cross between Kafka on the Shore and Angels and Demons.

I couldn’t even begin to like Butterfly, with her manipulation of Benjamin and another friend, Beatrice. She treats them horribly, especially Benjamin, torturing him physically and emotionally. If this is how she treats her friends, I’d hate to see what she’d do to an enemy. The descriptions of Benjamin’s journey through Paris and New City are pleasant enough, but that is not enough to sustain a book. And what does the author mean by naming his protagonist for himself? Is he trying to say that this really happened to him? Is it just one more illusion in this book where the reader- and Benjamin for most of the story- has no idea what is real and what isn’t? Or was the author just tired of the question every writer gets: “Is this character you??”

I think I’m not cool enough to appreciate this avant garde book.

The above is an affiliate link. If you click through it and buy something, Amazon will give me a few cents.

Posted by Laurie Brown at 10:02 PM No comments: 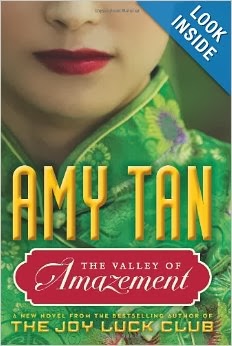 With her first novel in eight years, Amy Tan returns to the theme that she does so well: mothers and daughters. Spanning four generations and two continents, The Valley of Amazement tells us the story of Lucia (Lulu), her daughter Violet, Violet’s daughter Flora, and Magic Gourd, the courtesan who stood in as surrogate mother to Violet after her mother left her in Shanghai.

Conflicts with her mother and father lead Lulu to become sexually active at a young age and at a time when this was not permissible to women. When she falls in love with a visiting Chinese artist, she runs away from home and follows him to Shanghai. But she ends up having to make her own way, with Violet a toddler and her infant son kidnapped by the artist’s family. With few paths open to a woman in China at the time, Lulu chooses to establish a courtesan house, which becomes renowned for accepting both Western and Chinese clients and for providing business advice. She becomes wealthy, but doesn’t realize what growing up in a brothel, however high class, is doing to her daughter, who feels the business- and her missing brother- mean more to Lulu than Violet does, just as Lulu had felt her mother’s passion for science mean more to her than Lulu did.

The story is written from more than one point of view; Violet, Magic Gourd, and Lulu all take a turn speaking. All have hard lives; the men in their lives are, for the most part, uncaring as to the needs of the women, treating them as objects that will be dealt with only when convenient- or even keeping them as outright slaves. Taking place in the dawn of the 20th century, the story is set against the political and social changes that took place in China.

I loved this book and couldn’t put it down. The details of the lives of these women made them come alive; what they wore, what they were expected to do, how they felt. I have to admit I had a hard time liking Violet at first; she comes off as a spoiled brat in some ways, but when you figure that she was being left on her own so much of the time, with only her cat as a friend, it’s hard to expect her to be otherwise. And she very quickly learned how hard life could be later. I was disappointed in ‘Saving Fish From Drowning’ but I’m very happy to see that Tan has returned with a great story.

I received my copy of this book from the Amazon Vine program in return for a fair review. This in no way influenced my review.

The above is an affiliate link. If you click through and buy the book from Amazon, they will give me a few cents.
Posted by Laurie Brown at 3:25 PM No comments: 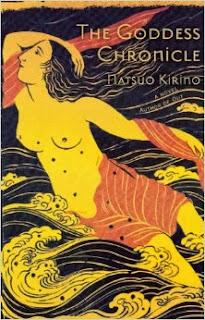 Sisters Kamikuu and Namima are inseparable as little girls, so it’s a shock when one day they are forcibly separated. Kamikuu, the older sister, stands for light and will be trained to be the isolated island’s new Oracle, separated from the rest of the tribe, her only contact with Namima being a few words when Namima delivers her basket of food for the day. One day, the teen Namima is informed that she will be the servant of darkness and guard the cave where the dead are stored, as is ever the fate of the sister of the Oracle. This, she thinks, is the worst fate possible. Little does she know that worse awaits when her lover betrays her.

Namima narrates this story, which interweaves with the story of Izanami, the Goddess of the Underworld, who likewise had a faithless lover, Izanaki. Readers who know Japanese mythology will recognize those names; this book is one of the ‘Myths’ series put out by Canongate wherein famous writers retell the old stories. Izanami and Izanaki are part of an ancient creation myth as the parents of the islands of Japan. When Izanami died, Izanaki trapped her in the underworld and went about impregnating mortal women, who Izanami then killed. The moral of The Goddess Chronicle seems to be that males, whether they be god or mortal, are tricky beings only after one thing and women are destined to die because of them.

The book is somewhat dry but well written. My problem with it is that it seemed a bit simplistic: women die because of men. I can see that being true in the age when the myth arose; childbirth was dangerous and frequent; men ruled and took what they wanted. But to make that the point of a book today seems dated; it’s like a feminist book from the 1970s where the women were all good and the men all bad (and if a woman was bad, it was because a man caused them to be). Nonetheless, I enjoyed it and found myself caught up in Namima’s story, rooting for something bad to happen to her erstwhile lover.

The above is an affiliate link. If you click through it and buy the book, Amazon will give me a few cents. This in no way affects my review.
Posted by Laurie Brown at 9:16 PM No comments: 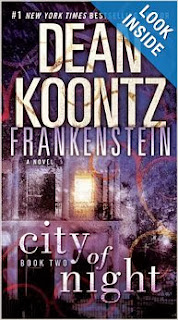 This is the second volume in Koontz’s modern day reimagination of Frankenstein and his creation. Victor Frankenstein- now going by the name Victor Helios- is a wealthy scientist who has created an army of lab grown minions in his bid to take over the world and eliminate humankind. Carson O’Conner and Michael Maddison are New Orleans detectives who have become aware of Helios and his plans via Deucalion, the ‘monster’ of Shelley’s novel. In this installment, things are not going well with some of Helio’s creations. Some are going mad. At least one has escaped. Some are developing free will and volition, which Helios had specifically tried to eliminate. He is having special trouble with creating a wife who is perfect and intelligent yet never asks questions. And there is something weird going on at the city dump- weird even by the standards of beings created in a lab for specific jobs, jobs that include burying bodies by the dozens.

The book has a frantic pace, with several plotlines running: Carson  & Michael; Arnie, Carson’s brother and his caretaker Vicky; the events at the city dump; Helio’s wife and the house servants; to top if off, there is a hurricane brewing. Reading it feels like you’re careening out of control, but Koontz has it all well in hand. The books suffers a bit from being the middle book where no plot lines are tied up, but it leaves the reader eager to get to the third book.

The above is an affiliate link. If you click through and buy the book, Amazon will give me a few cents. This in no way influences my review.
Posted by Laurie Brown at 2:26 PM No comments: 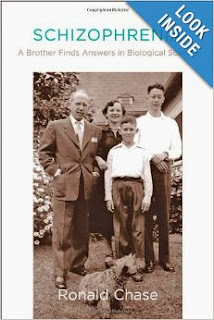 Ronald Chase is uniquely qualified to write a book on schizophrenia; as a biologist he has combed research papers on the subject and as the brother of a person with schizophrenia he knows up close and personal what havoc the disease wrecks on the lives it touches. To blend these two perspectives, Dr. Chase utilizes a unique way of structuring the book: the chapters alternate between the personal story of his brother, Jim, who developed schizophrenia while in college, and the historical and scientific story of schizophrenia itself. The reader is free to either read alternating chapters first, either acquainting themselves with Jim’s story or reading the hard science; or to read them as presented. Personally I read it as presented; the short chapters on Jim’s life (hard to have much of a life when your disorder keeps you living in group home type situations and blunts your curiosity, cutting short what could have been a brilliant life) broke up the facts and figures of the hard science nicely. I found it to be the best book on schizophrenia I’ve read. Jim’s story is heartbreaking, but at the end the science gives just a little bit of hope for others with this same brain disorder- and the author makes it clear that schizophrenia *is* a disorder of the structure and chemistry of the brain, not a ‘mental’ illness that a person can just buck up and overcome.


The above is an affiliate link. If you click through it and buy the book, Amazon will give me a few cents. Neither this or the fact that I got the book free through the Amazon Vine program changed my review.

Posted by Laurie Brown at 1:49 PM No comments:

Email ThisBlogThis!Share to TwitterShare to FacebookShare to Pinterest
Labels: mental illness, neurology, psychiatry
Newer Posts Older Posts Home
Subscribe to: Posts (Atom)
I read voraciously.I'm an Amazon Vine reviewer, so I get some pre-release books from them. I also occasionally get early reviewer books from Good Reads or Library Thing. I take huge numbers of books home from the library, and buy used ones from the Friends of the Library book sale, yard sales, and thrift stores. This means that not all the books I review are new ones; some are hot off the press, many are older- occasionally very old.