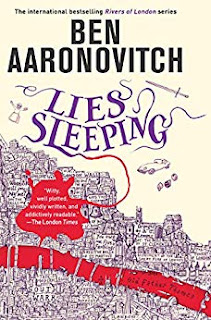 This is the conclusion of the Faceless Man (ver. 2.0) arc that has carried through all the previous Rivers of London books and graphic novels. Narrator Peter Grant has had a lot of adventures through the series, but this arc has always hung over him. Finally it comes to a close.

This installment uses pretty much the entire cast of characters that have been introduced through the years, both police and river gods. The Faceless Man has pulled together his own army, too, in a very different way than the good guys have. The good and bad guys clash a number of times through the book before the final battle, and the energy stays high most of the time. Of course, all these people and events and of course the great descriptions of places and history gets confusing, at least for me, and I found myself looking back at pages before – and wishing I had the entire series to check things in. But I loved the book. Peter Grant is one of the world’s great characters; the attention to details that Aaronovitch gives him is wonderful, and his dry humor is great. And I have loved seeing him mature through the books; in his abilities, his character, and in his relationship with Beverly. The author has started a different series set in the same universe, and I do hope this doesn’t mean the last of Peter Grant and co.! There are still things that have not been tidied up, even some things just started in this book. Five stars!

Posted by Laurie Brown at 3:24 PM No comments: 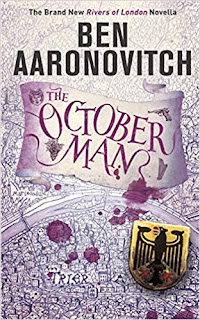 Posted by Laurie Brown at 7:07 PM No comments:

A Night in the Lonesome October, by Roger Zelazny & Gahan Wilson. Avon Books, 1993 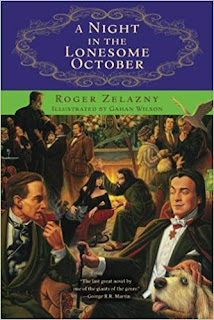 Roger Zelazny- a favorite author of mine for his ‘Amber’ series and ‘Lord of Light’- has written a marvelous romp of a horror story. The large cast of characters includes figures from horror stories, Victorian mysteries, and vintage monster movies. You figure out who these folks are as you go along; a couple I never figured out. Apparently there is a large site on the web where people have discussed all this!

Written from the POV of Snuff the dog, who is really the familiar of Jack; the tale has 31 chapters, one for each day of October. The characters have a countdown; on the 31 is a full moon, and a great magical working will take place. Some characters are Openers, who seek to open a portal for the Elder Gods to enter the world. Some, like Jack, are Closers, who seek to keep them out. Each has an animal familiar- Graymalk the cat, Bubo the rat, and so on.

Snuff is not just a guard dog; he’s a worker of magical mathematics. He seeks to find out where exactly the battle must take place; to figure it, he must know how many individuals will be there and whether they are Openers or Closers. He talks with the other familiars to see what they have seen and heard. And he tries to figure out who is murdering some of the contenders… killings that have not taken place before on any of the previous events.

Until the very end, the story takes its time, then it happens in a rush. In the beginning, there was a point where I was thinking “Where is this all going?!?” and then it started to make sense. It’s witty along with creepy and I really enjoyed it. The illustrations by Gahan Wilson (a rather morbid cartoonist) are nice, and I really love the cover illustration (not by Wilson) that shows most of the main characters. I heartily recommend this for reading in October to get in the Halloween mood!

Posted by Laurie Brown at 2:57 PM No comments:

Email ThisBlogThis!Share to TwitterShare to FacebookShare to Pinterest
Labels: horror, humor, monsters, mystery
Newer Posts Older Posts Home
Subscribe to: Posts (Atom)
I read voraciously.I'm an Amazon Vine reviewer, so I get some pre-release books from them. I also occasionally get early reviewer books from Good Reads or Library Thing. I take huge numbers of books home from the library, and buy used ones from the Friends of the Library book sale, yard sales, and thrift stores. This means that not all the books I review are new ones; some are hot off the press, many are older- occasionally very old.