Bono: The Amazing Story of a Rescue Cat Who Inspired a Community, by Helen Brown. Citadel Press, 2018 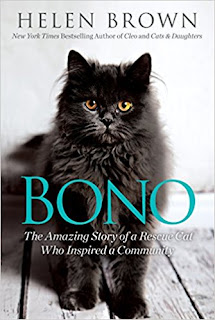 After a bout with cancer, Australian author Helen Brown decides she needs something more out of life than what she’s getting. She gets an invite from her editor to come to New York City for a while, for the US release of her book, Cats & Daughters. I guess I should say, she asked her editor to ask her. She has been longing for the bustle and energy of the city that never sleeps; her marriage, while happy, (her husband is a jewel) is routine, and her days banal. So it’s arranged; Brown will go to New York with her daughter (in hopes of making that relationship better). She visualizes endless shopping, art, and Broadway shows. Then her editor throws her a curveball: since Brown’s new book is about cats, why not be the temporary foster parent for a shelter cat? That’s not what the author had in mind, but she figures it’ll work. She envisions a cuddly lap cat who dozes a lot, and, besides, what are the chances of actually finding a short term dwelling that allows cats?


Neither dwelling nor cat are what she expected. The dwelling is a dump when she gets there. It cleans up well enough, though. Then she goes to get the cat. He is Bono, a black long haired refuge from hurricane Sandy. Except his hair isn’t long now- due to horrible matting, he’s been shaved except for his head, the tip of his tail, and his paws. And he seems hyperactive. And he’s a special needs cat- he needs medication daily. Not the low maintenance cat Brown had in mind at all.


The story tells the adventures of capturing the cat, getting him to take his pills, and allow human contact are part of the story. The majority of the story, though, is about Brown and her daughter’s- and later, just Brown’s when the daughter leaves- adventures in New York. There is also a good bit about Brown’s relationship with her daughter, and how it changes during their stay. In the end, the book is more about these things than it is about Bono and finding him a forever home. While the book is good, I would have preferred more cat and less relationships- or, at least, an equal amount. Four stars out of five.

Neither of these things influenced my review.
Posted by Laurie Brown at 2:57 PM 1 comment:

Email ThisBlogThis!Share to TwitterShare to FacebookShare to Pinterest
Labels: cats, memoir, midlife
Newer Posts Older Posts Home
Subscribe to: Posts (Atom)
I read voraciously.I'm an Amazon Vine reviewer, so I get some pre-release books from them. I also occasionally get early reviewer books from Good Reads or Library Thing. I take huge numbers of books home from the library, and buy used ones from the Friends of the Library book sale, yard sales, and thrift stores. This means that not all the books I review are new ones; some are hot off the press, many are older- occasionally very old.