It’s Not Dark Yet: A Memoir, by Simon Fitzmaurice. Houghton Mifflin Harcourt, 2017 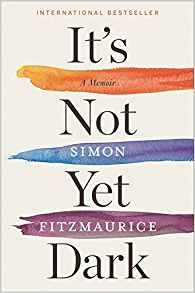 Simon Fitzmaurice was only 33 when he was given a diagnosis of ALS (Lou Gehrig’s disease, motor neuron disease) and given four years to live. A filmmaker with a young family, he wasn’t about to just sit and give up. In 2010, the muscles that allowed him to breathe failed, and he was advised to just die quietly. He opted, against medical opinion, to go on a ventilator. Since then, he has sired more children, written and directed a movie, and written this autobiography, along with, of course, being a father and husband every day. Not exactly a waste of resources!

The book is short and a fast read (less than two hours), but it’s not lightweight. It’s very heavy. This horrible disease has stolen so much from Fitzmaurice, but he lives every day to the fullest. He communicates via an eye glance computer, which turns his eye movements into a voice. His family is 100% supportive. He has a lot to live for and a lot of things he wants to get done. It’s pretty inspirational. Four stars out of five.

I received this book free from the Amazon Vine program in exchange for an honest review.