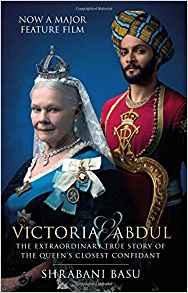 By the time Queen Victoria started the last decade of her life, she had lost her beloved Prince Albert in 1861 and her Scottish personal servant, John Brown, in 1883- many people speculated that she and Brown were secretly married, they were so close. She was a sad and lonely woman. Then, unexpectedly, she found a new friend: Abdul Karim, from India.

He arrived as part of a contingent of Indians, a gift, as it were, to her for her Golden Jubilee. While a number of high ranking Indians visited England for the event, Karim was sent over (along with several others) as a servant. At first he waited at table, but he moved on swiftly. Despite a language barrier, the Queen and Karim began to communicate. He was solicitous and caring. Soon he was teaching her Hindi; soon after that he became a secretary. He took care of her correspondence and performed other duties. When they were apart, they wrote each other constantly. As they became closer, Victorian began to advance him in rank and give him valuable gifts and honors. This brought out jealously in both the servant’s quarters and the court- especially the court. He was being allowed to walk, sit, and ride with the court elite, and this made them furious. He was from the lower middle class, he wasn’t a Christian, and, worst of all, he had brown skin. Obviously inferior! He was with her until her death; the last person to be with her body before it was put into the coffin. Needless to say, the court instantly stripped him of as many things as they could, demanded all of Victoria’s letters to him and burned them on site. He went home to India.

Having read a couple of biographies of Queen Victoria, I knew much of this story already, but it was written from the court’s point of view- that Karim (known as the Munshi, a Hindi term for ‘secretary’) took horrible advantage of the Queen. But the author found Karim’s family in Karachi, and they had a trunk full of his journals. This unlocked the past and gave the Munshi’s side of the story.

Because I’d read about Victoria’s life before, I found some of the book tedious. But if you’ve not read about the Queen’s later life, it won’t be tedious. It’s a short, interesting book that shows us how some things never change.

I received this book free from the Amazon Vine program in exchange for an unbiased review.

Neither of these things influenced my review.
Posted by Laurie Brown at 2:47 PM