The Kinship of Secrets, by Eugenia Kim. Houghton Mifflin Harcourt, 2018 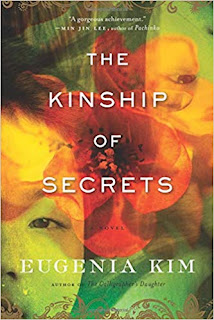 In 1948, a Korean family is split up. Najin and Calvin Cho want to go to the USA with their two daughters, but money is short and there is the issue of convincing the government that they intend to return. Leaving one daughter will solve both those problems, so they take baby Miran with them and leave Inja with Najin’s family. New born Inja doesn’t miss or remember them; to her, her uncle and aunt are parents. Her grandparents also share the house with them, so she has no lack of family.


When the Korean War breaks out, it makes the possibility of getting Inja out dimmer. Inja and her family find themselves running south from the North Korean troops, and spend time in a refugee camp with nothing to their names. It takes years for them to rebuild their lives again. Meanwhile, Najin sends packages to them every week with money, clothing, and other goods. She doesn’t know that Aunt and Uncle have to sell most of the goods to get enough money for food and necessities. The Chos work endless hours to afford a home in the suburbs as well, and Miran grows up as an American girl, albeit one who knows she is different.


It’s not until Inja is in high school that the Chos find a way to get her out. By then, Inja doesn’t want to go; she has friends, is doing very well in school, and she loves her Uncle and Aunt. She has no desire to see these people she doesn’t know; she speaks little English and her sister speaks no Korean. Miran is shaken by Inja’s arrival; suddenly she has to share everything including her room. Can two sisters so different find their way to love each other?


I loved this book. I felt great sympathy to all of them; they were all doing the best they could in bad situations. I held my breath to see how the sisters would do together; would they get along? Would they come to understand how the other had grown up? Would Inja grow to love her blood parents? The characters are easy to care about. The prose is wonderful. Five stars.
Posted by Laurie Brown at 1:49 PM