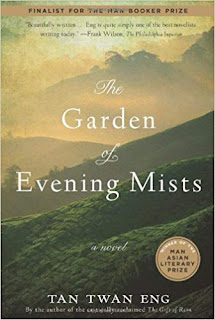 Supreme Court judge Teoh Yun Ling was the sole survivor of a Japanese prisoner of war camp; everyone else, including her sister, was abused and raped and then killed, bodies put in a mass grave. After becoming a lawyer and then judge, she prosecuted the Japanese soldiers that could still be found in Kuala Lumpur. Now she is retiring, because of a creeping case of dementia and aphasia. Her story covers the time before the war, when she and her sister visited Japan and saw the gardens her sister fell in love with, but mostly settles after the war, when Yun Ling decides to have a Japanese garden created in memory of her sister. At the urging of Magnus Pratorius, a South African expat tea farmer, she meets Nakamura Aritomo, who was once Emperor Hirohito’s head gardener until he exiled himself. He refuses to take the commission, but says he will take Yun Ling on as an apprentice and she can learn through doing how to create a garden herself. Surprisingly, given her hatred for the Japanese, she accepts. She is to help develop Yugiri, the garden of the evening mists, the still point within a country roiling with guerilla violence.


While there are some violent events, such as the guerilla rebellion that leaves many of the colonists dead, most of the story about small things. The learning of how to borrow scenery in a garden, the art of setting stone, learning archery. It is about Yun Ling and Aritomo’s developing relationship. Yun Ling’s narration is oddly flat; is this because of the aphasia? Does she have PTSD? The dialog is often stilted. The story moves very slowly; it’s very heavy on descriptions. It jumps around in time. Aritomo, the most important person in the story other than Yun Ling, never comes to life. It’s weird; the book was annoying in ways but also oddly compelling and very, very beautiful. I often thought “Will this story ever end?” but still could not even think about putting it down. Four stars.
Posted by Laurie Brown at 2:00 PM