The Age of Light, by Whitney Scharer. Little, Brown and Company, 2018 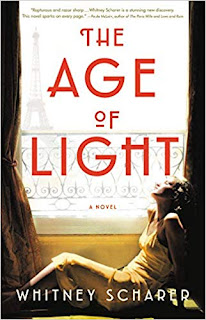 In 1929, American Lee Miller moved to Paris to become a photographer. She was not stranger to cameras; she had a career as a model of Vogue, and her father used her as a model from toddlerhood on. But she doesn’t want to be a model anymore; she wants to be a creator of art, rather than someone to be gazed upon. These are the days of the Dada and Surrealist movements, of Picasso and Cocteau. She hasn’t been there long before she meets the much older Man Ray and they soon develop a relationship that is sexual, emotional, creative, and business. He teaches her the art and tricks of photography, while she takes care of the business of his studio. He nurtures her talent, but is very possessive, even, at one point, claiming a technique she developed as his own. She is possessive in some ways, too; she was obsessed with Kiki de Montparnasse, Ray’s ex who had posed nude many times.


Miller is not all about Ray, though. She was a war photographer during WW 2, going into dangerous areas; this is the part of her life she is most renowned for. She later became a 5 star chef and a food writer for Vogue- and also an alcoholic. This is an engrossing story of a woman trying to make it in the world on her own considerable talents, rather than as the wife or mistress of a man. Along with the standards of the time that dismissed women as trivial, she had to fight to overcome having had a pretty creepy father and a childhood rape. I loved the eccentric characters that she knew during the 30s, and the descriptions of the parties and dinners. Miller and Ray are extremely interesting characters, but frequently unlikable ones. The writing is lovely. Four stars.