The Way of All Flesh, by Ambrose Parry. Canongate, 2018 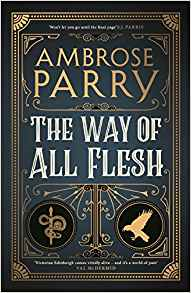 In 1847, Will Raven has just been accepted as an assistant under the supervision of Dr. James Simpson. Simpson was a real person, an obstetrician who pioneered the use of anesthesia for childbirth. This granted him a room in the Dr.’s house to live in, which was a good thing as Raven already owes money to a gang of violent thugs who want their money NOW. Right before he moves, Raven finds his friend, Evie, a prostitute, dead- and it wasn’t an easy death. Evidence says she died in agony. Raven wants to find out how and why she died thus. Also living in Simpson’s house is the maid Sarah Fisher, who, when housework doesn’t prevent it, works for the doctor doing paperwork and concocting treatments. She dreams of becoming an apothecary, but her gender prevents this. Raven finds himself working in the clinic Simpson runs out of his house, going on house calls with the doctor, and trying to find time to find out why young women are dying like Evie did. Sarah finds herself caught up in this, also.


This is an incredibly detailed novel. The authors (Parry is the pseudonym for a husband and wife writing team) present Victorian Edinburgh, both Old Town and New Town, in all its filthy, class stratified, glory. There is a great deal of medical detail- amputations without anesthesia, complicated childbirths, how homeopathy was killing people. It was a time without many real cures for anything, and medical research could be as sloppy as the doctors sitting around sniffing chloroform to see what it did. It was a frightening time to need medical care! While I appreciated the details, some may find certain scenes too gory, like the childbirth where the child was positioned wrong to come out.


I found myself sunk deeply into the story and the time and place (while I love Victorian London, it was nice to have a change of venue), but the story wandered. The medical history, while fascinating, over powered the crime story- at times I forgot all about the murders. There are a lot of side tracks. If you want a tight murder mystery, this isn’t going to be for you. Personally, I was happy to follow along all the plot lines and side tracks. Four and a half stars.

I received this book free from the Amazon Vine program in return for a fair review. This did not affect my review.
Posted by Laurie Brown at 3:47 PM