Once Upon a River, by Diane Setterfield. Simon & Schuster, 2018 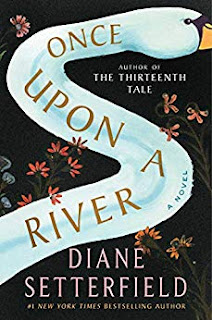 At some point in the 1800s, on the long night of the winter solstice, people gathered at the Swann and hoisted pints and told stories. Then the door bursts open, and in comes a large man with his face horribly mangled, carrying a small child. He falls on the floor in a dead faint, and at first the people think they are both dead. But the man breathes, and so Rita Sunday, the village healer, sews him up and puts him to bed. The child is dead; she is removed to an outbuilding. Rita feels compelled to try and figure out how she died, only to find that the girl is also alive.


Of course this event sets people talking.  Three sets of people think the girl is their missing relative. The girl gives no clues; she doesn’t talk, and seems content to go with any of them. How the village people work out who gets her, and the machinations that some characters go through trying to use her to solve their problems, makes for a wonderful multi-thread story. There are hints of magical realism or fantasy; there is a mythical ferryman on the river, and the Thames almost seems to be a character. It’s a slow but well-knit tale. The characters are very well done; my heart broke for some of them. Five stars.
Posted by Laurie Brown at 3:27 PM