In the Night Wood, by Dale Bailey. Houghton Mifflin Harcourt, 2018 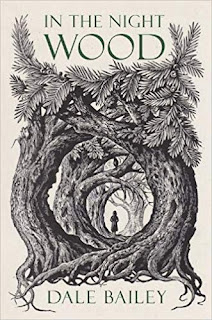 This story is almost over the top gothic. It begins with a husband and wife, Charles and Erin Hayden, inheriting a fortune and a huge manor house in England, one surrounded with primeval forest. They are a miserable pair; he had an affair with a co-worker, their daughter died as a direct result of this, his academic career is stalled, and the wife has retreated into a haze of alcohol and prescription drugs. They hope this move will help them move on, but the house belonged to Caedmon Hollow, who wrote a Victorian dark fairy tale that Charles has been obsessed with since childhood. Erin is the last survivor of the family


They find the place unsettling; they see images of their dead daughter everywhere. The forest is moving closer to the house. Charles, looking into the past to write a biography of Caedmon Hollow, meets Silva, the head of the village’s historical society. She’s an intelligent and attractive woman, and her daughter is almost a carbon copy of Charles’ and Erin’s dead daughter. You can see where this might head. The whole situation is a great set up for supernatural horror.


Sadly, I ended up not caring for the book very much. Charles is an unlikable main character, even though he’s supposed to be seeking redemption. Erin is a mere shadow of a person. The other characters start with great potential, but end up just props for Charles. The ‘feel’ of the story is wonderfully full of dread, as the unknown closes in. I loved the use of Celtic mythology. Charles and Erin’s grief is portrayed beautifully, if that word can be used for grief. But the end came rushing too suddenly; it was tied up as if the author had a deadline to meet. I give it four stars for gothic suspense; can’t give it five because of the main characters.
Posted by Laurie Brown at 2:51 PM