The Wolf and the Watchman, by Niklas Natt Och Dag. Atria Press, 2017 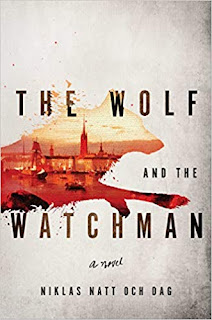 In Sweden in 1793, some children find a body floating in a particularly gross part of the river. They call on Mickel Cardell, a watchman moonlighting (and drinking) as a bouncer, and he fishes the body out. It’s not odd that there is a body in the river, but this one is missing both arms and legs, has had his tongue cut out, his eyes removed, and has had hot pokers shoved into his ears. This is grim, even by the standards of the day.


Cardell, an alcoholic war vet who lost his friend and his arm but gained PTSD, finds himself drawn back into an investigation into who the body was, and how he came to be so cruelly treated. He is pulled into the case by Cecil Winge, a brilliant investigator who as the reputation of never prosecuting a person without total evidence that he did the crime. He is frail- dying of tuberculosis- but wants to find the truth about this horrible crime. Cardell can go places and ask questions that Winge cannot. He’s also an asset in the worse parts of town, his wooden arm giving him an advantage in a fight. Neither of them can imagine how this crime could be committed.


The strands of the lives of two other people fill out the story. Young Kristofer Blix, a veteran who apprenticed to a military doctor, wishes to become a doctor but must wait for the next classes to start. Teen aged Anna Stina is an orphaned fruit seller who is arrested for prostitution- only because she refused the attentions of a boy. She is sent to a workhouse that is pretty much hell on earth. Her treatment at the hands of her jailor, with starvation and sexual assault, is horrific. She must find a way out before she ends up dead as others have.


The story is relentlessly grim; more Dickensian than Dickens ever wrote. Every detail of the sordid lives is revealed. While all four of the main characters are sympathetic, not much around them is. All four are caught by their horrible circumstances. I really liked the relationship between Cardell and Winge; Winge’s fate in the end saddened me because I had started hoping this would be a series! Don’t read this if you don’t have a strong stomach. It’s horror after horror, but the protagonists are all smart and resilient. Five stars.
Posted by Laurie Brown at 6:45 PM