Not Our Kind, by Kitty Zeldis. HarperCollins, 2018 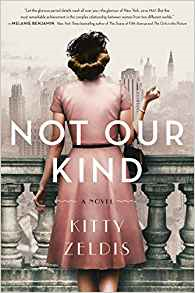 In the time after WW 2, Eleanor Moskowitz, young Vassar grad, is on her way to interview for a teaching position, when her cab collides with another one, this one bearing Patricia Bellamy. The jolt leaves Eleanor with blood on her face, and Patricia feels compelled to invite Eleanor to her home to freshen up. Having by now missed her appointment, Eleanor goes with Patricia. Patricia lives in an expensive, upper class apartment building. Patricia happens to need a tutor for her 13 year old daughter Margaux, recently recovering from polio, which has left Margaux with a limp and a large attitude. Match made in heaven? Well, it might be- except the Bellamys are WASP and Eleanor is Jewish. But Eleanor and Margaux have made an instant connection, so Patricia decides it’s worth the risk- if Eleanor shortens her name to ‘Moss’. It would never do for anyone in the building- especially Wynn Bellamy, Patricia’s husband- to know they had allowed a Jew in, even as an employee.


Eleanor finds herself walking a tight rope as tensions rise in the Bellamy summer house, with Eleanor as a live-in, Wynn there most of the time, and then Tom, Patricia’s brother, moves in. While Margaux is doing much better, both physically and emotionally, Eleanor isn’t sure she can stay any longer. And Eleanor’s mother, a successful milliner, doesn’t understand why Eleanor doesn’t want to join her in business. And Eleanor might soon find herself having to do that, when suspicions about her arise.


I enjoyed the book- it’s a bit of a tense read- but I wish the characters had been fleshed out more. The *do* thinks, but we don’t get a feeling of why they do them. Scenes change quickly without seeming to evolve or slide into each other. It does a great job of pointing out class differences and women’s roles. I’d give it four stars- good, but not great. And while it doesn’t affect the story- I really wished more time had been spent on Eleanor’s mother and her millinery. Total vintage clothing junkie here!

I received this book free from the Amazon Vine Program in return for an unbiased review. This did not affect my opinion.
Posted by Laurie Brown at 2:23 PM