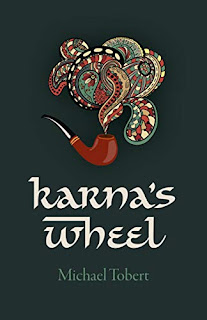 Stephen Smith’s mother has died. He has inherited the few things she owned- which include some boxes of her father’s memoirs. His flatmate, Seamus, talks him into reading them and then using them as the basis of a screenplay. Turns out Stephen Smith (using the same name for two characters caused a fair bit of confusion for me), having tired of working in the jute mills in Dundee, packed it in, moved to Calcutta in 1923…. To work in the jute factories there. The journals cover a lot of years, and they reveal the nasty racism that was rife in the white owned factories- and pretty much everything else the whites ran in India.


A couple of side plots in the current time run alongside this reading of the past: One is Stephen’s fraught relationship with Julia; the other is the investigation of Stephen’s mother by Detective McCorquodale. The detective thinks Stephen’s mother was selling drugs, and wants to go through every single thing she owned, including tearing out things in her flat. Stephen learns a lot about his family- and himself- through the novel.


The story was interesting, but it moved very slowly. I got confused several times, switching between times and characters. There was a lot of detail in the Calcutta sections, and those were the parts I liked best, although they were horribly grim. I got bored at times, and even desperately wanted the story to come to an end a few times. There are good things in the book, but somehow they just didn’t come together for me. Three stars.
Posted by Laurie Brown at 2:04 PM