The Golden Tresses of the Dead: A Flavia de Luce Novel, by Alan Bradley. Delacorte Press, 2019 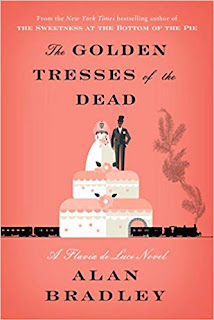 Flavia de Luce is the 12 year old heroine of a series of mysteries; this is the tenth installment. At this point, she is an orphan, with one sister marrying and one sister ensconced in the library. Her father figure is Dogger, her late father’s aide (and, I think, gardener), her partner in a private detective firm. He provides advice and, when needed, an adult presence when snooping is undertaken.


At Ophelia’s wedding, things go awry right off- when she cuts the cake, she finds an embalmed human finger. Flavia spirits this off before the guests see it, and the party goes on. Despite Ophelia’s leaving, the house is not empty; two missionary women are staying with them, and they seem, well, odd. Then a couple of dead people turn up, and Flavia and Dogger’s investigation turns up even odder things. On top of that, they get their first paying case.


The story is fun, and I enjoyed it, even though things didn’t always seem to get properly tied up. I occasionally lost track of who was who, what with multiple plot lines running. With the young age of the protagonist, I assume it’s written for tweens, but the plot(s) are interesting enough to engage an adult. I enjoyed that a girl of 12 was that mature, and her proficiency in chemistry. Four stars.