Sister Queens: The Noble, Tragic Lives of Katherine of Aragon and Juana, Queen of Castile, by Julia Fox. Ballantine Books, 2011 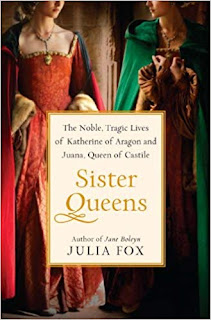 Juana of Castile and Katherine of Aragon were both daughters of the renowned monarchs, Isabella of Castile and Ferdinand of Aragon, the backers of Columbus and creators of a united Spain. Most people have heard of Katherine because she was the first wife of Henry VIII of England, who he divorced and by doing so created the Anglican Church, in defiance of the Catholic Church. Juana is far less known, even though she was on paper a ruler of a far larger country; as her brothers all died before Isabella and Ferdinand did, she was the ruler of Spain. But they both found themselves mistreated and usurped from their thrones by the men they loved and trusted.


Katherine failed Henry VIII by not producing a male heir. The English people loved her, and she was a good queen- while Henry was off fighting in France, Katherine organized the Battle of Flodden Field, wherein the English forces defeated the Scots. Juana was hot tempered and given to sulking when she didn’t get her way; she frequently chose hunger strikes as a way of communicating her frustration. Sadly, this enabled first her husband, then her father, and finally her son to brand her as insane and shut her away, her imprisonment handled by abusive jailors.


We know in fair detail how Katherine lived and what happened to her because she wrote copious amounts of letters, many of which have survived. Juana was not allowed to do this, and so we know almost nothing of her life in prison. This creates a problem for the book: the author tries to give equal time to both women, but, because of lack of sources, takes to speculating on how Juana felt or what she said. If this was historical fiction, this would be just fine, but it’s not suitable for factual biography. Not only is it speculation, but it’s filler in an attempt to even the wordage. Other than that, I have no problem with the book; it gave me a look at Katherine that is different from what I’ve had before. She wasn’t the stodgy hausfrau that most biographers of Henry portray her as; she was young and beautiful when they first met, she was very well educated, and she ran her household- and the country- very well. Juana was just as well prepared to rule and was blocked from ever doing that. Was she “mad”? She possibly had some manic traits or the like, but from what little we know from people who spoke with her during her imprisonment, she spoke calmly and reasonably. A four star book.