A World Lit Only by Fire: The Medieval Mind and the Renaissance; Portrait of an Age, by William Manchester. Back Bay Books, 1993 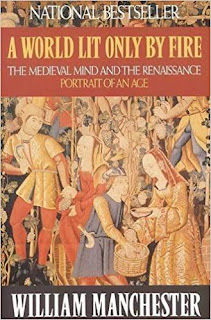 This history book is a fast and easy read, but I noticed some problems with it. One, the author states that he did no primary research- he didn’t do any digging into old manuscripts from monasteries, or find letters from 500 years ago. He *did*, however, bring a lot of it together into an engaging and accessible book. But there are more problems.


He shows only the bad side of the Middle Ages; in fact, he disparages it in some odd ways. One of his statements is “In the Medieval mind, there was no conception of time”- really? The monasteries certainly kept good calendars, the peasants knew when to plant for their crops to ripen in time, they knew how long it took for babies to be born, and when the saint’s special days were. No, they did not have clocks other than sundials or water clocks, but they certainly knew about the passage of time. He just about calls the people who lived in the medieval era a bunch of idiots that didn’t learn a thing for a thousand years. It’s true; the world was grim and brutal in those days, but it was not without learning.


He gets more enthusiastic when the Renaissance bursts on the scene and people start making long exploratory voyages- the entire back third of the book is about Magellan. He is also enthusiastic about the blossoming of protests against the Catholic Church- he delights in telling tales about Pope Alexander VI’s sexual antics and the selling of offices (he doesn’t have one good thing to say about the Catholic Church).


While I enjoyed the book, the fact that I found untruths in it made me wonder how many other untruths he was writing that I’m not enough of a history buff to catch. I means I cannot really trust anything he writes in this book. To explain the whole Medieval period and the beginnings of the Renaissance is a huge chore; even if he did the research he should have done, it would have been really difficult to explain it all in three hundred pages. I give it two stars, because it kept me entertained.