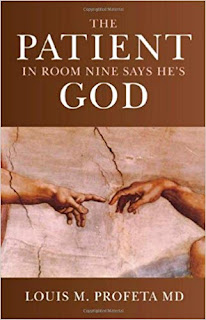 Dr. Profeta is an emergency room doctor. He sees life at its most frantic. But he has managed, through the years, to see the spiritual and moral issues in medicine. The short chapters tell us about his patients, his co-workers, his friends and family. He can come across as arrogant, but he admits when he’s wrong. I got this book thinking it would be a series of patient cases, a la Oliver Sacks. It’s not- or, at least, that’s not *quite* what it is. The cases aren’t as odd as ones a neuro doctor gets, so there aren’t as many medical details. Profeta leans toward the ethical and spiritual issues in the cases, and includes a lot of personal history and spiritual ponderings. Four stars.
Posted by Laurie Brown at 9:15 PM