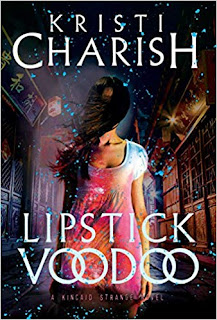 Kincaid Strange can’t get a break. She’s a necromancer who raises the dead for a living. Like people who shoot the messenger, clients aren’t always pleased with what their dearly departed have to say when she raises them, and they take that out of Kincaid. So how to pay the rent is just her first worry… her roommate, Nathan Cade, has his own problems. He’s a ghost, but now he’s stuck in a zombie body that is rapidly breaking down. Kincaid has no idea how to help him. She’s being stalked by Gideon, the powerful ghost magician who kind of owns her after a mishap. Then there is her ex, Aaron, the Seattle cop who is on the supernatural beat. He’s come to her with the problem of a supernatural serial killer, one who is freezing their victims solid. Seattle PD has washed its hands of the supernatural bureau, so there is zero money in it for Kincaid and she finds herself in the freelancer’s usual position of ‘doing it for the exposure’.


I liked Kincaid, although with the constant action she really didn’t have much time to show many moods other than ‘exhausted’. I kind of liked Nate, but he’s immature (although trying) and the stalking of his ex meant he lost a lot of points with me. The ex-boyfriend/PD guy had no personality. Gideon has possibilities. I’ll be keeping an eye out for this new urban fantasy series. This is the second book in the series; I’ve not read the first one. Four stars.
Posted by Laurie Brown at 3:22 PM