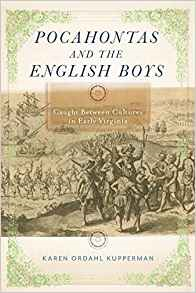 Most Americans have some vague recollection from school that Pocahontas was taken from her people to England. In fact, even as a 10 year old girl, she learned English quickly (as kids do) and served as translator and go between for her father. At least three English boys were given to the various tribes to absorb their languages and facilitate communications. For the most part, these exchange children were well treated, but there were many incidents where one side or the other told lies to the children, which they then carried to their hosts. It got so neither side trusted the children. As they became adults, their situations became even more suspect. Pocahontas of course married an Englishman and went to England, where she died, but the English boys had varied fates. In the conclusion, the author compares the children to Stockholm Syndrome sufferers, whereby they are put in a terrifying situation but then are treated with kindness by their captors.


While the book wasn’t difficult reading, the author goes into great detail about the actions of the colonists and the Native Americans, and I would sometimes become confused as to which group or person she was talking about. It’s a great book, though, for showing the kind of misleading things the English did to take advantage of the Native Americans, as well as the situations the colonists found themselves in, in an area with different plants and animals from what they were used to. Four stars.
Posted by Laurie Brown at 8:10 PM