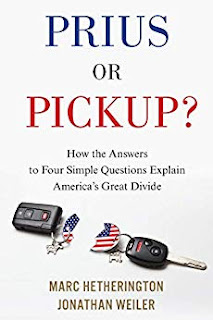 Hetherington & Weiler put forth the theory that there are two types of people: fixed, and fluid. The fixed have a world view of danger: people and nature are out to get them. Fluid folks, on the other hand, find the world a delightful place to explore, filled with good people. Fixed people drive giant four wheel drive pickups or Hummers, keep big dogs, and prefer plain coffee from Dunkin Donuts over fancy Starbucks concoctions. Fluid folks drive small cars that are less damaging to the environments, like cats, and love trying new cuisines. Oh, and fixed people tend to live rural, while fluids congregate in the city. Most people are NOT pure forms of either, but land somewhere in the middle of the spectrum. Now, there is nothing wrong with being on either end of the spectrum, but… in America, these tendencies are being used by the major parties to divide people and gain support. This is what’s behind the growing chasm between Democrats and Republicans. The Republican Party stresses the dangers in the world, and that they are the only candidates that can protect the people of the USA; Democrats try to say they are supporting programs like the ACA that will benefit all classes. Now, this is a broad brush to paint the political/sociological scene with, but it seems, in most cases to be true.


And it’s getting worse- the two sides don’t get together very often. If the fixeds and the fluids worked together, partied together, went to school together, they would learn that the other side isn’t really the bunch of idiots they think they are. Hard to do when the Powers That Be try to demonize the other side.


Are they right about this? Yes, I think- partly. The chasm between sides is getting worse every day. And it’s obvious that the divide is being used by said Powers That Be. Is it quite as simple as that? Well, no, I don’t think so. There are a lot of other things affecting the world. But this book is a great start to understanding the problems. The one problem I see is that the authors are clearly biased towards one side; it happens to be the side I mostly fall into, but it’s going to make it harder for the side they are against to take the book seriously. Four stars.
Posted by Laurie Brown at 1:35 PM