Romantic Outlaws: The Extraordinary Lives of Mary Wollstonecraft and her Daughter, Mary Shelley 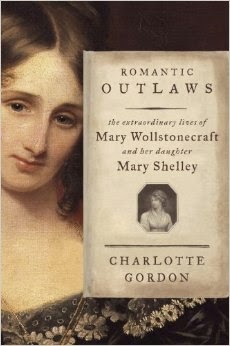 This thoroughly researched dual biography presents us with the lives of two women who were indeed outlaws – they defied conventions by living by their pens and having children out of wedlock. Both were groundbreaking writers- Mary Wollstonecraft wrote political and social criticism from a feminist viewpoint (work that was given serious consideration and debated by the intellectuals of the day, right up until they found out it was written by a woman) while Mary Shelley (nee Godwin) gave us the classic ‘Frankenstein’.

Both women had unpleasant childhoods; Mary W. had an abusive, drunken father and a mother who died young, leaving Mary W. to provide for them all. She eventually died only 9 days after giving birth to Mary Shelley. Mary S.’s father married a woman she despised- a woman who reciprocated that feeling. Both women had children out of wedlock, which meant polite society would have nothing to do with them. Both women were constantly importuned by their families to send them money. Both of them had their work denigrated by critics, usually simply for being written by a woman. They were feminists long before the term was coined. Both women, while primarily known for only one book each, did a lot of writing throughout their lives.

The book, while grounded in facts, is an easy read- once you get past the format. The author devotes every other chapter to each Mary in chronological order. With them having the same name- and with some other name duplications, too- I had a bit of trouble at first figuring out which Mary was being discussed. Thankfully, it doesn’t take too long to get the hang of it. Gordon really brings the women to life, especially Mary S.; Mary W. fares a little less well. She comes off as a bit pathetic in a couple of her love affairs. I’m not sure whether this is the fault of the author or just how Wollstonecraft really was. One thing I was impressed with was the author’s description of the French Revolution from an English person’s point of view- Mary W. went to write about the revolution as it happened and lived there until it got just too dangerous. If you have an interest in early feminist writers, take a look at this book.

Neither of these things influenced my review.
Posted by Laurie Brown at 9:54 PM