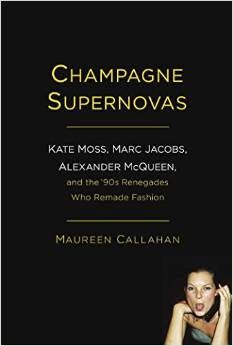 The 1980s were all about excess- huge hair styles, giant shoulder pads in rigid skirted suits, fancy everything, lots of cocaine. At some point in the 90’s, though, things changed. Grunge took over from hair metal. Fashion got stripped down and dirtied up and became shocking instead of pretty- but the cocaine stayed. The author has picked out three people who she feels were the primary forces behind this movement: two fashion designers and one model.

Kate Moss has a very different look from the super models of the 80s; skinny, wan, and messy. She became the first model to have the look that came to be named “heroin chic”- strung out and apathetic. Marc Jacobs’s first collection- which failed miserably- was grunge. Alexander McQueen was an outsider, showing in empty warehouses and stealing fabric for his impossible to wear early collections.

Of course these three did not work in a vacuum. Kate was discovered by a photographer digging through a drawer full of ‘maybes’ at a modeling agency; McQueen was given contacts by his ‘muse’, Isabella Blow; Jacobs took the traditional route of design school. And the zeitgeist of the world of haute couture was changing.

The picture Callahan paints of these three and their world in the 90s is not pretty. All three indulged in huge amounts drugs- I’m talking super human amounts that it’s hard to believe they survived it. Their personal lives were wrecks for most of that era. It’s rather hard reading, really- but I couldn’t put it down because it was another of those books that’s like watching a train accident. But it was also very interesting to see how art and fashion made such a sea change so fast.

The above is an affiliate link. If you click through and buy something, Amazon will give me a few cents. This in no way affected my review.
Posted by Laurie Brown at 3:42 PM