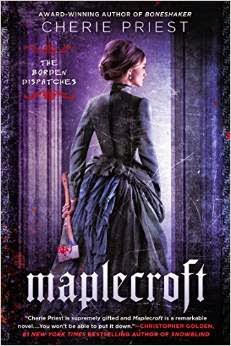 Lizzie Borden -Lizbeth- yes, ax wielding Lizzie Borden- and her invalid older sister Emma live quietly a Maplecroft, a large house in coastal Fall River, MA. At least that’s how it seems to outsiders. The house is far away enough from neighbors, to conceal a lot. Like a basement laboratory, a large gas fired ‘cooker’ beneath the basement floor, and the strange things that come creeping around the house at night, pounding on the walls, seeking entrance. Because there was a lot more to the story of her killing her father and stepmother with an ax. Her father and stepmother were long gone when she took an ax to the bodies that still shambled around.
In the same vein as ‘Queen Victoria: Demon Hunter’, Priest has taken a historical personage and inserted a horror tale into their biography. In this case, it’s not run of the mill zombies or vampires. Priest has created her own monsters, albeit ones that seem like they would feel right at home in H.P. Lovecraft’s Cthulhu mythos. Somehow, people in the town are being infected by… something. Something that changes them slowly to have razor sharp teeth and glassy, dull eyes. To lose their wits and become violent. What is infecting them? Is it supernatural?

Lizbeth and Emma have been trying for two years to figure it out when they run out of time. Suddenly it’s not just an isolated person or two. They are forced to take the town doctor into their confidence, and soon there is an out of town inspector poking around. To complicate things further, Lizbeth’s actress girlfriend is staying with them, a woman who is intensely nosy.

This was a really fun book to read- yes, I think reading creepy things at night is fun. The fact that the monsters are never totally explained adds to the creepy factor. People changing into beings that defy the laws of physics adds to it, too. There is a constant, palpable menace. I have to admit that I was dissatisfied with the fact that things weren’t well explained until I found out this is the start of a series. It makes sense to leave things to explain in later volumes. The story is told from different points of view: Lizbeth’s, Emmas, the doctor, a professor who Emma-posing as a male marine biologist- sent a sample of unknown sea life, and others. This creates a fuller picture of the action, and of the characters. A fast, absorbing read.

The above is an affiliate link. If you click through and buy something, Amazon will give me a few cents. This in no way affected my review.
Posted by Laurie Brown at 5:29 PM