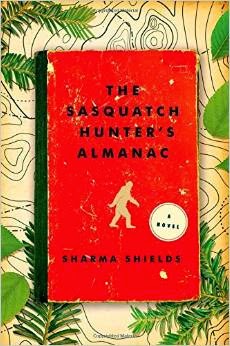 In 1943, when Eli Roebuck was nine years old, his mother invited a large, non-vocal, hairy, man named Mr. Krantz to their house for tea. Afterwards, she walked off into the forest of north Idaho with the hairy man and didn’t come back. This set Eli off on a lifetime search for Sasquatch. Not in a flamboyant, showy, way, but as scientifically has he can do it. Mr. Krantz has become Eli’s great white whale, and it affects all his relationships. His two marriages suffer from this, as do his relationships with his daughters.  They are all secondary, as is his career as a podiatrist, to his hunt for Mr. Krantz.

The magical realism in this novel means that it’s no surprise that Sasquatch exists; there is also a lake monster, half dog babies, and unicorns. Shields has created a fairly seamless world, based in eastern Washington and north Idaho. Different chapters are told from different points of view: Eli’s, various members of his family’s, even Mr. Krantz’s. The cast of characters is interesting and varied; they are far from caricatures but they seem a little… flat? Everyone is fighting their own monsters, but somehow they don’t come completely alive. Still, I enjoyed the book a lot, and will be looking out for more of Shields’ work. (It didn’t hurt that it was set in the area I live in)

Neither of these things affected my review.
Posted by Laurie Brown at 7:06 PM