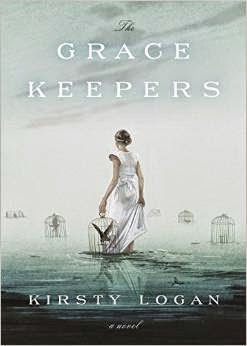 Callanish is a Gracekeeper; she lives alone on a tiny, remote, island and gives water burial to the dead brought to her. North lives on a circus boat with her trained bear; she performs with the bear when the circus docks at a large island, at the shore line. Boat living people- damplings- don’t go ashore willingly, nor are they welcomed by the landlockers. Both these teens have secrets they are keeping, secrets which will change their lives once they are known- and their secrets link them to each other. Their fates are both arranged by others; neither sees a good way to change their fate. A bad storm shows them other options, though, if they will have the strength to try for it.

Logan has created a world where there is little land left; the seas have risen dramatically. No one alive remembers the world as it was before, only that some people known as ‘the bankers’ caused the change. With so little land, farming is very limited and food is constantly scarce, especially for the circus damplings, who rely mainly on food ‘tips’ from their audiences, seaweed, and a few fish. I think because of the circus and the young protagonists with secrets, the book reminded me in ways of Laura Lam’s ‘Pantomime’- this is a good thing! I loved ‘Pantomime’! I really liked both of the main protagonists; they are strong young women. There is no real villain- although there is one extremely self-centered woman in the circus who threatens to derail North’s life even she is a developed, well rounded personality not a caricature. Logan has detailed her world with scents, tastes, sounds, and textures that bring it to life. I read this book in a day and a half, not wanting to put it down. I don’t know if this is the start of a series- it did end rather abruptly; if it is, I definitely want to read more.

The above is an affiliate link. If you click through and buy something, Amazon will give me a few cents. I was given this book free by the Library Thing's Early Reviewer's program in return for an honest review. Neither of these things influenced my review.