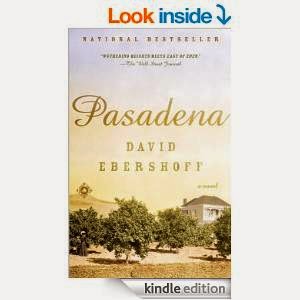 I am conflicted about this book; on the one hand, it’s historical fiction set in southern California, where I grew up; on the other, the characters frustrated me so badly I wanted to reach in the pages and slap them.

The story is told mainly through the device of it being told by a real estate agent to a prospective buyer of Rancho Pasadena, a huge ex-orange orchard and mansion that have gone to ruin. Blackwood, in 1944, is thinking about buying it to turn it into tract housing, which should net him huge profits. With WW 2 ending, lots of GIs will be returning and wanting to buy new homes. But he wants to know why the Rancho was abandoned. The story is told, in large part, via Cherry Ney- real estate agent and longtime friend of the main characters - as she relates it to Blackwood.

Sieglinde (later Linda) and Siegmund are the children of Dieter Stampf. They grow up on a sea cliff, fishing and growing onions, in abject poverty and near incestuous closeness. When they are teens, Dieter goes off to WW 1, and after years, returns with Bruder, a fellow southern Californian, who stays with the family. Linda’s attention turns to Bruder, but he mostly remains aloof. After leaving to work as foreman at Rancho Pasadena, he requests that Linda come work there, too. Does he love her, she wonders? Why else would he ask her to come to Rancho Pasadena- but why does he act so standoffish? She can’t read his thoughts and he refuses to talk. Meanwhile, the current owner of the rancho, Willis Poore, is using his money to impress- and coerce- Linda. Linda doesn’t know who to trust, much less who to love. Poorly socialized by her upbringing, she’s not good at reading social cues. Linda was thrown into situations that she was totally unprepared for and Bruder was an unforgiving man.

I really enjoyed the book, but I felt it badly in need of an editor. A lot could have been cut and the story would have been tighter and easier to follow. There is an abundance of details; sometimes too much detail. The author tells us all about the sights, sounds, and especially the smells- especially the smells of men and how that attracted Linda. Some of the detail that seems excessive actually tells us about the era, such as the lists of things in store windows or groceries, but I felt it was too much. The book sprawls in an ungainly manner.

The story is as much a love letter to southern California’s past as it is a human love story. In that aspect it succeeds as well as it does when it deals with the humans, if not better. There is a lot about classism and racism here, as well as environmentalism. It just tried to do too many things.

The above is an affiliate link. If you click through and buy something, Amazon will give me a few cents. This in no way affected my review.
Posted by Laurie Brown at 3:12 PM