The Keepers of the House, by Shirley Ann Grau. Avon Books, 1964 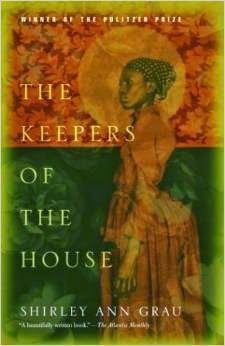 The Howlands have lived on their well-to-do farm for seven generations, since the end of the War of 1812, when the first William Howland decided he didn’t want to go home but to settle in some place with easier land to deal with. He didn’t live long- killed by an Indian raid- but he did live long enough to sire six children. Every generation had a William Howland, until two generations each produce only a single daughter. Abigail Mason, of the seventh generation, is the chief narrator. In this deep South setting, there is a tremendous amount of prejudice still around in the 1950s and 60s.

This Pulitzer Prize winning novel is broken into five parts; the first four are from the point of view of different people (although the first and last are both Abigail) and an epilogue. The middle sections are first William’s (narrator Abigail’s grandfather) and then Margaret’s- William’s housekeeper/mistress who is a woman of color.

Margaret is the daughter of a free black woman in a village in the woods and a white surveyor who came through the area. Her white blood doesn’t show in her, but she is considered an outsider in the village because of her white father. When William runs into her in the swamps and offers her a job, it gives her a chance to escape, into another situation where she is considered an outsider, this time because of her black blood.  When she has three children by William, no one cares. It’s considered just part of living in the south. Margaret also raises Abigail, due to Abigail’s mother dying young. When Margaret’s children reach a certain age, they are sent north to be schooled and raised as white.

Abigail marries a young politician and becomes the perfect wife and mother. But her husband turns out to not be who she thought; it’s not bad enough he’s a bigot himself, but he joins the KKK and votes against integration. This creates problems between them, but nothing like what happens when word leaks out about William and Margaret’s relationship. Because there is something about their union that is intolerable to the bigoted rednecks of the area. And they will take revenge on the Howland family for hiding this fact for so many years. Their violent and destructive acts won’t be the last acts of revenge, though. Abigail will get the last word on that subject.

This is a powerful book. I did have trouble following it at first because of the way names were repeated within the Howland family, but as I got further in I sorted them out. The characters are vivid and fully human, not stereotypes. The descriptive passages bring out the physical beauty of the area; the author clearly loves the geography of the state she grew up in. But the sheer ugliness of the actions of many of the people are what grabs the reader. I can only imagine the impact it might have had when she wrote it, during the civil rights movement. I think this is an important book for people to be reading now, as America seems to be at risk of sinking back into the mindset of the era and area.

The above is an affiliate link. If you click through and buy something, Amazon will give me a few cents. This in no way affected my review.
Posted by Laurie Brown at 3:22 PM