The Witch of Portobello, by Paulo Coelho. HarperCollins, 2007 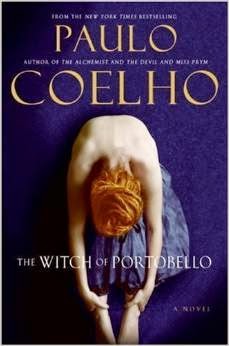 I think the author meant for this novel to be one of those big, important, spiritual books that changes the lives of the readers. Sadly, it doesn’t.

It had the potential; a young woman gets in touch with her spiritual self and starts channeling the goddess Hagia Sophia. The back of the book says, in part, that the story will “transform the way readers think about love, passion, joy and sacrifice”. But it misses the mark.

The Witch, Sherine Khalil (who takes the name Athena), is born to and abandoned by a Gypsy woman. She is then adopted by Christian parents in the Middle East, and eventually brought up partly in England. She gets jobs easily in spite of not being trained for them (including one that makes her very well off). She marries and has a child, then divorces the man. The church won’t allow her to take Holy Communion after her divorce, so she takes up her own spirituality. She stumbles into a group that seeks enlightenment through unrhythmic dance. She develops followers, everyone loves her, even a woman whose lover falls in love with Athena… and she values none of it except the child. She gives up pretty much everything, but it’s not sacrifice if she doesn’t value what she gives up- and it turns out in the end that she doesn’t give up as much as we think. I never get the feeling that she feels passion about much of anything. She just sort of wanders through life. She’s not afraid to try new things, and I admired that, but for the most part I just couldn’t understand her.

The story is told through “interviews” with the various people in her life- her birth mother, her adoptive parents, her ex-husband, the journalist who falls in love with her, everyone who has been around at the important events of her life. This may be part of the problem with the book; we never get to know
Athena’s thoughts and feelings directly. In a way, it made me think of the structure of the New Testament- we read a lot about Jesus but we never hear from him directly. Perhaps the author intended to make Athena the daughter of the great Goddess. But if she is, she’s a very stand off-ish deity.

Coelho is one of those authors that I had heard great things about and so I was quite disappointed. I may still try reading ‘The Alchemist” since that’s supposed to be his best work, but can only give this book three stars.

The above is an affiliate link. If you click through and buy something, Amazon will give me a few cents. This in no way affected my review.
Posted by Laurie Brown at 4:53 PM