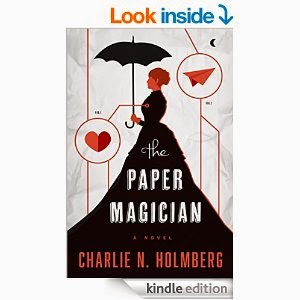 Nineteen year old Ceony Twill has graduated magic school and is being sent for a year’s apprenticeship with a Master Magician. Sadly, she’s not going to learn to bespell metal; she’s being sent to a magician who uses paper for his spells. She considers this a bad fate, paper magic not being very fearsome and useful. She rapidly learns there is a lot more to it than she thought as Emery Thane demonstrates. And soon she’s learning on the fly when Thane is put out of action by an Excisioner- a magician who wields flesh. Thane will die soon if Ceony cannot best the Excisioner.

I have mixed feelings about this book. On the one hand, the author introduced a method of magic I’ve not seen used before: the magic of folding paper to create objects of power. It never occurred to me that origami could produce such things as a self-powered glider, a protective chain worn around the body, an animated dog or a beating heart. On the other hand, the story features a teenager falling in love with her 30 year old teacher (nothing happens between them; he spends most of the book in a coma). The teenager herself is bright, brave and talented but kind of irritating with her snoopiness. The time spent with her cooking meals and doing laundry were really not needed as part of the book. The first part of the book moved speedily along, with lots of things happening. The second half bogs down as Ceony wanders through the chambers of Thane’s heart and learns his history via scenes from his past played out in front of her. That section could use some serious editing. Final verdict is that if the library gets the other two books in the serious I’ll probably read them, but I’m not going to go seeking them out. Not sure if this book is aimed at the Young Adult crowd or adults; our library had it in the adult section but it seems more fitting for YA.

The above is an affiliate link. If you click through and buy something, Amazon will give me a few cents. This in no way affected my review.
Posted by Laurie Brown at 9:49 PM