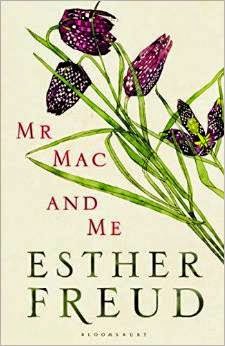 Mr. Mac is the famed Scottish architect and artist Charles Rennie Macintosh. Me is young Thomas Maggs, son of the local pub managers. Maggs is club footed and has a talent for drawing; his fondest wish is to get out of little seaside village he lives in and see the world. His family spends its time working hard and trying to not upset his drunken, abusive father. When Macintosh and his beautiful, red haired, wife rent a tiny cottage in the seaside village, Maggs suddenly has someone who appreciates and even encourages his sketching of boats in the margins of his schoolwork. Soon Maggs is entangled in the lives of the Macintoshs as he sees lives that are very different from any he’s seen in the village. This budding relationship is threatened by the onset of WW 1 and the warnings the British government publish about spies and traitors; Macintosh speaks with a heavy accent- could he be German? He walks the cliffs at all hours, frequently using binoculars. There are German words in pamphlets in his house; he even corresponds with a German! Could he be in the village to spy for the Germans?

This is a coming of age story; young Maggs has his first romantic relationship, works for a rope maker to help support the family, learns to look at the world with new eyes, and learns horrid fear as Zeppelins fly overhead. It’s also a story about how abruptly lives can change; a village that people come to to enjoy holiday becomes a watchful town with soldiers billeted in it, handmade rope is being replaced by barbed wire, a Scotch artist is suddenly seen as a German spy, people die or nearly die, and people are changed in ways no one thought they could be.

The prose is just lovely; it’s like the words were lovingly set by a jewel maker. Freud made me able to see this little village and feel the fear of the Zeppelins. It was a delight to read.

I received this book free from the Amazon Vine program. The above is an affiliate link; if you click through and buy something, Amazon will give me a few cents. Neither of these things influenced my review.
Posted by Laurie Brown at 12:26 PM