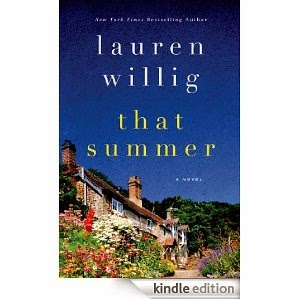 ‘That Summer’ takes place in two times: 2009 and 1849 (with some brief interludes in earlier years). In 2009, Julia in New York has just inherited an old family house from her great aunt Regina- a woman she doesn’t even remember. Jobless, she decides to go see the house in England and put it in shape for a quick sale. She has family there; some cousins who believe the house should have gone to them and are very eager to help Julia sort through the piles of old things in the house, even bringing in an antiques dealer, Nicholas to value things.

Back in 1849, Imogene is living in a loveless marriage. In her teens she married Arthur Grantham, an older man, who she thought loved her but seems to have only collected her like he’s collected so many other things. His late wife’s sister runs the house; she has no friends. The only light in her life is her step-daughter, Evie. The only light, that is, until three of the pre-Raphaelite Brotherhood come by to look at Grantham’s collection of medieval things, searching for inspiration for their art. Imogene meets Gavin Thorne, the quietest of the trio, and finds he actually talks to her, rather than just seeing her as decoration. At this same time, 16 year old Evie meets Augustus Fotheringay-Vaughn, who seems very taken with her. The third artist is Dante Gabriel Rossetti, one of the PRB founders. These meetings set the rest of the story into motion; the story will have dire effects.

The story jumps back and forth between eras as Imogene’s tale unfolds and Julie strives to solve the mysteries that the house presents- and that the people who come to the house present. It’s a combination historical mystery and romance, and it’s quite well done and has an edge to it. Most romances make me cringe, but this one was handled realistically and with a minimum of “I don’t like yous” going on between the prospective lovers. Some events are foreshadowed but there are surprises, too. An interesting book that would make a good read during a fall evening.

I received this book as part of the Amazon Vine program in return for an honest review.

The above is an affiliate line; if you click through and buy something, Amazon will give me a few cents.

Neither of these things influenced my review in any way.
Posted by Laurie Brown at 4:29 PM