This is the final volume in Weldon’s trilogy set in the Edwardian era and featuring the wealthy Dilberne family. In this go round, the King invites himself – along with hiss wife, Queen Alexandra AND his mistress, Alice Keppel- to a shooting weekend at the Dilberne’s country house, which creates a panic in Lady Isobel. The country house is run down; the King – and his mistress- will be expecting flush toilets, electric lights and heaters, and up to the minute décor. This causes a hemorrhage of cash and a strain on the marriage. Meanwhile, their son Arthur is having problems with his American heiress wife, Minnie- he’s more interested in automobiles than in sex. Arthur’s socialistic sister has returned from Australia a well to do widow, and is living with a bohemian brother and sister duo and preparing to publish a book on the sex habits of the Australian aborigines, which horrifies her family. It’s all high-strung soap opera in a historical setting. 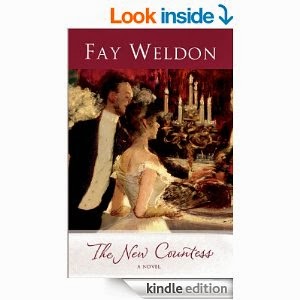 Although supposed to be along the lines of ‘Upstairs, Downstairs’, showing the lives of both the high class and the servants, only the first volume really featured the downstairs. They do appear momentarily in this volume, but are not fully formed characters.

I didn’t care for this volume as much as I did the first two in the trilogy. I liked Lady Isobel in the first two books; not so much this go-round, nor did I care much for Robert this time. The characters seemed harsh, mean spirited, and self centered. There is a rather bizarre little coda at the end, like a speculation in the first person while the rest of the book is told in the third person. And, sadly, the title gives away the event that I suspect was supposed to be a shock.

The above is an affiliate link. If you click through and buy something, Amazon will give me a few cents. This in no way affected my review.