The Tastemakers: Why We’re Crazy for Cupcakes but Fed Up with Fondue, by David Sax. Public Affairs, 2014 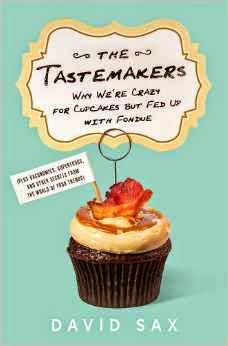 In ‘Tastemakers’, Sax examines food trends from all angles. He visits farmer’s markets, the research facility of Dole, and a man who is bringing back the older breeds of rice (while I knew there were a lot of strains of rice that we never see here in the US, I had no idea there were so very many!); talks with celebrity chefs, people who have made chia seeds a health food rather than a Christmas joke present, and people who own food trucks. He tells us that the current cupcake megatrend was started by a very short scene in ‘Sex in the City’- 20 seconds where a character eats a cupcake. Some food trends are created on purpose, as Dole is attempting; some are accidental like the cupcake one. The bacon trend started as a way for pork producers to use up something and for chain restaurants to have something cheap that they could charge a premium for when they put it on a burger, and morphed into a huge movement that affected all strata of food producers from home cooks to cheap chains to celebrity chefs. (Sax questions whether it’s a good idea to infuse bacon into everything; I have to say that, yes, yes it is.)

I’m a bit of a foodie, so I found the book fascinating. This is no cookbook; this is a sociological and historical book written in a brisk style.

I received this book from Library Thing: Early Reviewers program in return for an honest review. The above is an affiliate link; if you click through it and buy something, Amazon will give me a few cents. Neither of these things affected my review.
Posted by Laurie Brown at 6:01 PM