The Right of the Subjects, by Jude Starling. Damask Rose Press, 2014 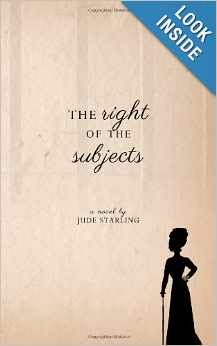 In ‘The Right of the Subjects’, historical novelist Starling sets her tale in the women’s suffrage movement in England. The early 1900s was a politically volatile time in Great Britain; it was not only women who could not vote but many men of the poorer classes couldn’t, either. It was also the time of the rise of labor unions fighting for decent wages and working conditions. It’s out of the working class of northern England that Evanna Bailie- Evie- comes; she goes to a suffragist protest as a lark with her sister Amie and the movement becomes a major part of her life. The sixteen year old woman meets Annie Kenney and other avid members of the suffrage movement and she sees a possible way out of her tedious, back breaking life as a weaver in a cotton mill. And she’s right; joining the movement has her traveling, having time to develop her artistic talent, and exploring sex. It also means going to prison regularly for protesting, going on hunger strikes and being violently force fed, and even rejecting water for so long that kidney problems arose in those that did so.

While I know a little bit about the British Woman’s Suffrage movement- mainly about upper class women such as Mrs. Pankhurst- I was completely ignorant about the role working class women played. I should have known that there would have to be a lot of less well off women to create the mobs that were willing to be arrested, beaten, sexually assaulted, and have their health and lives risked in prison!

Evie is an interesting and, as the story goes on, a sympathetic, protagonist; she undergoes a lot of growth in the story and has the good luck to find out who she truly wants to be. There is a strong cast of varied characters both historical and fictional; the movement brought different classes of women together as allies for the first time, and same sex relationships became quietly accepted. Told from Evie’s point of view, the story engages and satisfies.

Starling researches her books thoroughly, and with this book she includes ‘extras’, rather like a DVD; essays about things she found out about the suffrage movement. While certainly not necessary to understand the story, they add depth and make the reader appreciate the movement and the women who created it more.


The above is an affiliate link. If you click through and buy something, Amazon will give me a few cents. This in no way influenced my review.
Posted by Laurie Brown at 4:15 PM