This House is Haunted, by John Boyne. Other Press, 2013 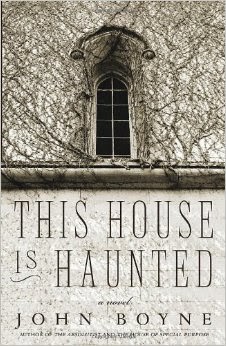 Set in 1867, this Dickensian novel actually starts with an appearance by Dickens himself. He gives a public reading of a ghost story, setting the mood for what follows. Eliza Crane, 21 years old, tells the story, adding an intimate touch. When her father dies, she seeks to get away from the home they’ve shared and takes a governess job in Norfolk, sight unseen, at Gaudlin Hall. After a couple of mishaps at the train station, Eliza is mystified to find herself met at the hall only by the children, Isabella and Eustace Westerley. At first it seems there are no adults in the house at all; inquiries made in town are stonewalled. Where are the parents? Why is there no staff? Almost immediately strange things start happening to Eliza; curtains move when there is no breeze, invisible hands grab and push violently.

The book is written in the style of the 1800s; it’s very much a Victorian gothic novel, right down to the language. As the story unfolds, some things have very mundane explanations but others clearly don’t. There’s a Hitchcockian twist at the end that will leave the reader with a feeling of dread. It’s not the greatest ghost story I’ve ever read, but it’s a solid one that sticks to supernatural fright rather than defaulting to slashing and gore like so many these days.

The above is an affiliate link. If you click through and buy something, Amazon will give me a few cents. This in no way affected my review.
Posted by Laurie Brown at 4:59 PM