The Vanishing, by Wendy Webb. Hyperion, 2014 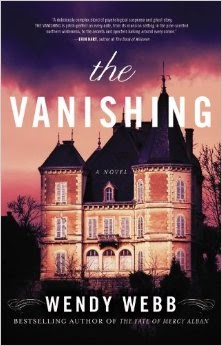 When Julia’s husband commits suicide after getting caught bilking people of millions, the courts come after all their assets, and reporters are hounding her, she doesn’t know what to do. So when Adrian Sinclair offers her a chance to come work as his mother’s companion and disappear off the radar, she takes the opportunity and leaves on the spot. But there are a few odd things about the situation; Amaris Sinclair has officially been dead for ten years, for starters. Their mansion is in the middle of untouched forest near Lake Superior, and they own the only town near it. Julia is having trouble remembering the actual trip to Havenwood. Her medications have been dumped. The only phone she’s found in the house vanishes after she makes one call. It’s obvious there are a lot of secrets- and ghosts.

The story starts out rather chilling. The sense that Julia is in danger is palpable, and she doesn’t know who she can trust. But it turns out somewhat fluffy, and many things are never explained- while other things are explained to death, with long expositions that tell rather than show. There are hints of reincarnation that are never explored. The story frustrated me, because it had a lot of potential and I didn’t feel it was done as well as it could have been. Not a great book by any means but if you want some creepies on a dark and stormy night it’s okay.

The above is an affiliate link. If you click through and buy something, Amazon will pay me a few cents. This in no way influenced my review.
Posted by Laurie Brown at 9:39 PM