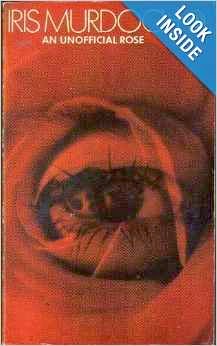 ‘An Unofficial Rose’ is a family story- a very dysfunctional family. The matriarch has just died, and the day of her funeral starts the book. With Fanny dead, Hugh Peronett is now free to rekindle an old relationship with Emma. His son, Randall, wants to be free of his wife, Ann, so that he can pursue Emma’s companion, Lindsey. Hugh’s grandson by his absent daughter, Penn, is visiting for the summer, and he pursues Randall and Ann’s daughter, Miranda-and he is in turn pursued by another character.  Meanwhile, members of another family also pursue various members of the Peronett family. Everyone wants someone else and there is not one simple relationship in the whole thing. This is a very flawed cast of characters; only Ann and Penn seem to be unafflicted with the urge to manipulate people that the others seem to have so strongly.

The book, written in 1962, is of course a product of its time. Ann is encouraged by the priest to stay married to Randall, even though he has deserted her for another woman, because marriage is forever and she can help Randall-even if he never comes back- by forgiving him and praying for him. A straight woman and a gay man stay together in an open marriage of convenience. It’s all right to have Randall, when asked by Lindsey what he would do if she changed her mind about having sex with him that night, say “I shall probably beat you and certainly rape you” and she accepts that rather than run screaming into the night.

In the end, the identity of the prime manipulator is a surprise. While there are some clues throughout the book,  it’s still not what you expect; it must have been a bit shocking in 1962.

The above is an affiliate link. If you click through and buy something, Amazon will give me a few cents. This in no way affected by review.

The above is an affiliate link. If you click through and buy something, Amazon will give me a few cents. This in no way affected my review.
Posted by Laurie Brown at 6:19 PM