Season of the Dragonflies, by Sarah Creech. HarperCollins 2014 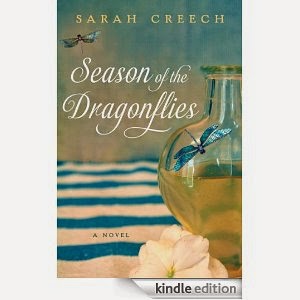 If you took Patrick Suskind’s ‘Perfume’ and mixed it with Alice Hoffman’s, well, any of her books, you might come up with ‘Season of the Dragonflies’. In the 1920s, on a tropical island, Serena Lenore discovers a magical variety of gardenia, which not only smells divine but also amplifies a woman’s talents and gives her… something… that allows her to succeed beyond all others. Through the decades this perfume has been shared, secretly and profitably, with a very few women in all different trades. There are a few rules that Serena handed down; one was to never, ever alter the secret formula. The sales of this perfume has made the Lenore family fabulously wealthy, although they live without conspicuous consumption and put a lot of money into philanthropy.

Willow has run the company alone for decades. When one of her daughters,Mya – who was the assumed heir to the company- goes behind her back and makes a deal with a client that blows up, the entire operation is in danger of failing. And when she performs some dark magic to repair things, it gets even worse. Can the recently divorced Lucia, who never had any magic in her and had no talent for mixing scents, help her mother and sister?

During the book, things change dramatically for all three Lenore women. Their roles change, their relationships change, even their talents change. It’s a time of growth for them; sometimes very painful growth. It’s also a time of learning to let go and trust the universe.

The story is well written enough although it does have a little bit of ‘first novelism’ in places- mainly in the romances. All three women find themselves involved with men who are almost too good to be true; it’s always hard for me to accept characters that have no flaws and when three of them appear in the same book it’s unbelievable- but then, this book *does* have magic as a reality in it, so perhaps this can be forgiven. The other thing I found a bit difficult was how easily the three women accepted the changes- major changes- in their lives. Still, I enjoyed the book a great deal and look forward to more by this author.