The Doctor and the Rough Rider, by Mike Resnick. Pyr, 2012 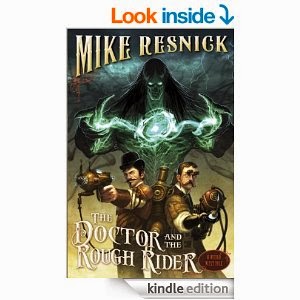 I’m not sure if this novel was meant to be for young adults (it was shelved in the adult section at the library) but it reads more YA than it does adult. It’s a steampunk western (think Wild, Wild West) using several historic figures- Theodore Roosevelt, Thomas Edison, Doc Holliday, Ned Buntline, Bat Masterson, and Geronimo- but in a very different North America. In Resnick’s version, the USA stops at the Mississippi River, held back by Native American magic. Some whites are allowed west of the river, but they are few. Geronimo, alone of the medicine men, wants to remove the barrier and allow whites to take over the continent.  The only white man he trusts to help him with this is Theodore Roosevelt, but the other medicine men are ahead of him- they’ve created a magical giant warrior, War Bonnet, specifically to defeat Roosevelt and Geronimo.

Sadly, the book bored me. There is no depth to the characters, and the plot is thin. I had to wonder why, if the Native Americans had a way to keep white people from taking over the continent- a way that was costing no lives- one of them would decide to end that; especially Geronimo, who in real life stated that he had been wrong to surrender and that he should have fought until he was the last man standing. Alternate history plays loosely with facts but usually leaves the characters of historical figures intact.

It’s an amusing story, but falls short of what I expected from reviews.

The above is an affiliate link. If you click through and buy something, Amazon will give me a few cents. This in no way affected my review.
Posted by Laurie Brown at 6:06 PM