Redefining Realness: My Path to Womanhood, Identity, Love & So Much More, by Janet Mock. Atria Books, 2014 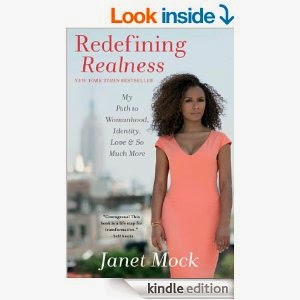 Janet Mock, beautiful former staff editor of People magazine, has been through a lot in her young life. Born Charles Mock into a family where both parents spent time doing drugs, kids were shuttled back and forth, older siblings raised younger ones- and sometimes sexually abused them- and everyone pretty much had to look out for themselves. Mock’s family was poor and multiracial. No one in her milieu knew about trans people, but she knew at a young age that she was a girl, and she had a strong personality that refused to back down. She dressed as a girl as much as possible and declared her new name to be ‘Janet’ when she was 15. Thankfully, her best friend was also trans, and she introduced her to the world of transpeople and the possibility of genital reconstructive surgery.

Mock is an accomplished writer and her story broke my heart. What she had to overcome to become ‘real’ was huge- the bullying, the poverty, the abuse- but her determination won over it all. She paid for all her hormones and surgery herself by being a temporary sexworker, undergoing GRS at 18 by flying, by herself, to Thailand. Despite all this, she never feel sorry for herself or makes it sound like she did anything remarkable; it was simply what she had to do. It’s a flowing narrative that didn’t allow me to put it down until I was done, and it made me glad to know that she has found herself at a place where she is ‘real’ and happy.

The above is an affiliate link. If you click through and buy something, Amazon will give me a few cents. This in no way affected my review.
Posted by Laurie Brown at 5:36 PM