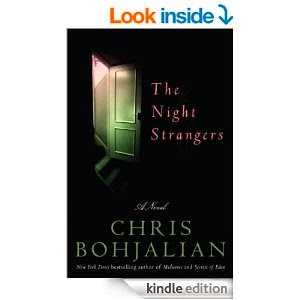 Chip Linton was pilot on a plane that lost both engines when geese got sucked into them; with no flat land close enough, he attempted a water landing a la Sully Sullenberger’s Miracle on the Hudson. Sadly, wake from a ferry turned the miracle into a massacre and thirty nine people died. Trying to escape Chip’s PTSD, the family- wife Emily and twin daughters Hallie and Garnet- moves to a small town in New Hampshire, where the new neighbors are friendly, the women are named for herbs, and all the herb women have greenhouses like the one on Chip’s new property.

‘The Night Strangers’ is a truly creepy book. It was written only three years ago, but has a strong vibe like horror from around 1970, like ‘Rosemary’s Baby’ or ‘Stepford Wives’: isolation; never knowing if one is imagining things or really being threatened; weird neighbors; is the horror human or paranormal? It has multiple threads of horror woven through it: Chip is either seeing and hearing the ghosts of Flight 1611 or his PTSD has escalated; the herb women are taking an inordinate amount of interest in Emily and the twins and have already renamed them with herb names; weapons around found hidden throughout the house.

Sadly, horrific as it is, the story doesn’t quite hang together. We’ve got possible ghosts from flight 1611, possible ghosts from the house, possible evil witches- it’s too much and they don’t mesh well. And the characters don’t seem plausible- even dealing with a husband with PTSD who is doing some seriously weird things most mothers wouldn’t let the just-met neighborhood herbalists basically take over their children anytime they aren’t in school, going so far as to rename them. I found the ending unsatisfactory, but it is very much in the vein of ‘Rosemary’s Baby’ or ‘Stepford’; if that is what the author was going for, he hit the nail on the head with that touch.

The above is an affiliate link. If you click through it and buy something, Amazon will give me a few cents. This in no way affected my review.
Posted by Laurie Brown at 5:18 PM