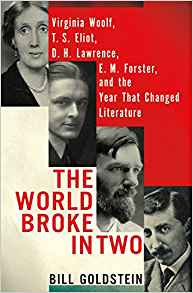 1922 was the year that ‘Ulysses’ was published and Proust’s work was translated into English. Willa Cather declared that the world broke in two in that year, because these were literary works that were distinctly different from all that had come before them. These works had effects on other writers, of course- Virginia Woolf said, after reading Proust “Well, what remains to be written after that?” Thankfully, after being unable to write due to illnesses both mental and physical, she found a new voice within her and created both “Jacob’s Room” and “Mrs. Dalloway”.

T.S. Eliot felt trapped by both his day job at a bank and his invalid wife. His own neuroses did not help; he had a great deal of trouble letting go of his new work “The Wasteland” and was an incredible frustration to the people who wanted to publish the poem.

D.H. Lawrence was traveling the world, trying to find a place where he felt he could write in peace. People seemed to be dying to have him stay with them, even though he was quite unreasonable about his situation, wanting to be put up by friends but also wanting to be left strictly alone. During this time he watched censorship battles being fought over his work, and published “Kangaroo” (which I had never heard of) and “Aaron’s Rod”.

E.M. Forster had writer’s block for well over a decade, but in this year managed to finish a book he’d started long before: “A Passage to India”. His life was unhappy; a closeted gay man in an era that did not allow homosexuality, he did not want to suffer the same fate as Oscar Wilde. His mental outlook wasn’t helped by living with his aging, control freak mother.

These four authors were affected by Joyce and Proust, even those who did not like the work they produced. They were also profoundly affected by the recent World War; “The Wasteland” and “Mrs Dalloway” both contain reactions to that.

The entwined biographies of the four, and what they published in 1922, make a good picture of how modernist writing was being created. The book is not fast reading (I tended to skip over a good deal of Eliot’s parts) but it’s good writing and the research is meticulous. Four stars out of five.

I received this book free from the Library Thing Early Readers program in return for an unbiased review.

Neither of these things influenced my review.
Posted by Laurie Brown at 12:53 PM