The Weight of Ink, by Rachel Kadish. Houghton Mifflin Harcourt, 2017 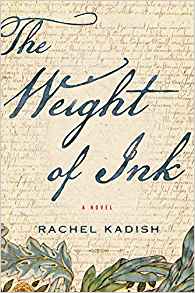 In the 1600s, Esther Velasquez is denied by Judaic law the right to read or write religious or philosophical works. In the 2000s, historian Helen Watt is having things mansplained to her by the department head. Some things never change.

Esther, a Portuguese Jew whose family fled to the Netherlands when Portugal expelled the Jews, is in a unique position. Not only does she long to read and write, she doesn’t want to marry and take the standard position of mother and housekeeper. She and her brother live with a blind Rabbi, and the brother is the official student, reader, and writer for him, with Ester listening in. But when they move to England and the brother leaves, Ester is the available scribe. And no one will find out a woman is doing the transcription. And it’s perhaps a gray area; she is, after all, just writing down a man’s words, not her own.

Helen Watt receives a call from a former student. He and his wife, while renovating an old house, have found a cache of old papers, looking to be in Arabic, Hebrew, or Spanish. Could Helen come and take a look? She’s not eager; she doesn’t imagine they could be anything important. Probably old shopping lists. But she’ll take a look, taking a grad student to do the grunt work. The papers are from 1691, and Helen realizes that they could be an important find. Now she must race against the rest of the history department, her own worsening physical state, and her impending mandatory retirement to get the papers bought, stabilized by the university library, and translated. The story that emerges is one no one imagined.

“Weight of Ink” has been compared to A.S. Byatt’s “Possession”, and it does certainly have similarities. But “Possession” is in large part a tale of two passionate love stories, while “Weight of Ink” certainly has passionate love stories in it, they are minor streams merging into the larger river of Ester’s desire for education and her evolution from scribe to something much more.

This is a great literary mystery, with new things turning up right up to the end. I really liked Ester; I warmed up to Helen as I found out more about her. The cast of characters is huge; not all are likable but that’s how life is. There are a lot of issues dealt with; homosexuality, pregnancy out of wedlock, Jewishness in the time of William and Mary, women’s issues, class, interfaith relationships, and philosophy all both entertain and educate the reader. While the book is slow in places, I never found it boring and it was actually a pretty fast read for a 600 page book! Five stars out of five.