How to Behave in a Crowd, by Camille Bordas. Tim Duggan Books, 2017 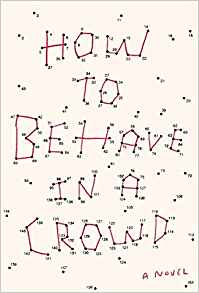 Isidore Mazel is the youngest of six children. The other five are geniuses; one performs in a symphony and writes music; the other four are intellectually advanced with two defending their doctoral thesis during the course of the novel; one is writing a sociological treatise on the family without them knowing about it; and one heading off for college at the age of 15. That one knows she’ll be a great novelist and has Isidore start on her biography, because she knows it’ll be important later. Isidore is the outlier; he’s never skipped a grade and really has no interest in academics. In fact, he has no real interest in anything.

This family is so dysfunctional that the father is never actually seen in the story, and he is referred to by the mother as “the father”- not ‘your father’ or by name. Mother doesn’t play a very large part, either. The kids all live in their own worlds, mostly reading and writing. The only thing they do together is watch TV shows that they mock. They are insulated from life, living in academics. When one finishes her Phd, she is so unnerved by the thought of going out in the world that she decides to go for a second Phd. None of them have friends. It’s like they’ve been raised by wolves with very, very high IQs.

Izzy (as he would prefer to be known but everyone insists on calling him ‘Dory’), has always been friendless, too. He spends recess in a stairwell, just staying away from the bullies. So he has no idea what to do when another class pariah, the clinically depressed anorexic, joins him in the stairwell. Nor does he have any idea what to do when his sister’s pen pal takes an interest in him instead. He has to fumble his way along in learning to deal with people- as we all do, but he has a bit of a handicap having no examples to work from.

It’s a coming of age in a strange way. Some of what happens to him is quite brutal for someone his age, and he’s a person who finds being kind is the easiest thing to do. I kept hoping for good thing to happen to him, but I have to admit I struggled to finish the book. This book is getting rave reviews from pretty much everyone in the universe, but I seemed to have missed the point. The lives of this family seemed very empty, despite all their reading and studying. The book is black humor, which I enjoy, but not enough of it to make it really interesting to me. Three stars out of five.

The link above is an affiliate link. If you click through and buy something- anything- from Amazon, they'll give me a few cents.

Neither of these things influenced my review.
Posted by Laurie Brown at 11:08 AM