Love and Other Consolation Prizes, by Jamie Ford. Ballantine Books, 2017 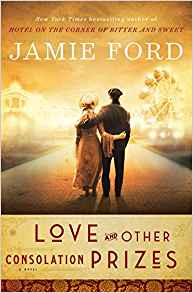 ‘Love and Other Consolation Prizes’ covers more than 50 years. At one end, we have a five year old half Chinese/half white boy being sent by his starving mother to America. After a horrible voyage (children packed into the hold like animals; any who got ill were thrown overboard) and being placed in a few different places, he comes into the hands of Mrs. Irvine, who sponsors him at Holy Word school. When his year-end review comes up, he asks Mrs. Irvine if he could maybe go to another school or something rather than continuing at Holy Word. In an act that seems like retaliation, she takes him to the Seattle World’s Fair (actually called the Alaska-Yukon-Pacific Exposition), where many donated things are being raffled off, and donates *him*.

At the other end, we have the 1962 Seattle World’s Fair, with a brand new Space Needle and much more. The little boy is now Ernest Young, senior citizen, living in a flea bag hotel, with his wife, Gracie, being in a state of dementia. But her memories are starting to come back, and she is calming down. At the same time, one of their daughters, Judy (Juju), a newspaper reporter, is searching for a great story- and has discovered, via old newspapers, that her father was the boy who was raffled off. She wants his story. He’s reluctant to talk about it, for reasons that become obvious.

When Ernest was raffled off, the madam of Seattle’s finest brothel won him. At first glance this would seem to be a bad thing, but it’s not. For the first time he has enough to eat, and his own room. He’s treated well. He’s expected to work and earn his keep, but he’s not a slave. The other servants and the ‘upstairs’ girls are likewise well treated. Of course, the upstairs girls run the risks of the trade- disease and nasty customers. Nasty customers are barred forever, but nothing stops disease. Madam Flo is the stereotypical hooker with a heart of gold.

As soon as he is won by Madame Flor, he makes the acquaintance of two girls near his own age: one the daughter of the madam, Maisie (although identified to all as her sister); the other is Fahn, a Japanese scullery maid. It turns out he knows Fahn; she was on the same boatful of indentured servants that he was on. Ernest and the two girls become fast friends in the years that they are there.

It’s a heartbreaking story in some ways; in other ways it’s heartwarming. Ford has researched Seattle history; there really *was* a child raffled off at the AYP Expo, although that one was a baby. The brothels of Seattle of course were real, including one very high class one that bribed everyone that needed bribing to stay in business. The girls- many of them Asian- kept as slaves in the low class ‘cribs’ were real.

There is a good balance of well-developed characters, great description of scenes and events, and action. We’re seeing the beginning of the modern age- electric lights taking over from gaslights, automobiles showing up on the streets- and it’s an exciting time. Five stars out of five.