A Secret History of Witches, by Louisa Morgan. Redhook, 2017 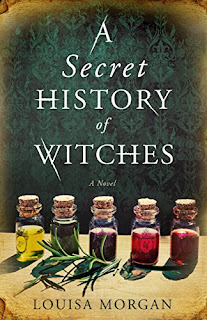 Starting in Brittany in 1821, this is the history of one family of witches, the Orchieres. They are Romani, and therefore automatically suspect whenever someone wants to persecute a witch. Which is why one night Grand-mere Ursule gives her life to hide the family from a witch hunting priestI, telling them to flee across the channel to Cornwall, taking the family’s two treasures: the grimoire, and the large crystal that was dug from the mud many generations ago.

Seventeen years later, having found an abandoned farmstead and settled on it, the priest who had been searching for them on the night Ursule died finds them again. Nanette, the youngest girl of the family, finds that Ursules power has passed to her, and she and her sisters make a spell of protection. And so it goes through the generations; in each generation, there is one powerful woman. Others may have the knack of potions or small spells, but only one carries the power to activate the crystal.

We meet five generations of women. Some I adored; one I disliked intensely. Fortunes change through the years- drastically. Some are lucky in love; some are not. Some are dedicated to honoring the wheel of the year; some don’t perform the rituals for years. In the final book, the power of the Orchiere line becomes crucial to the protection of England. Through it all, their power and religion must be kept strictly secret.

I really enjoyed this book. The details of the lives of the women- especially during their years on the farm- bring the story to life. These are vivid, strong women. The only flaw in the book is the last book; after the body of the book is told in a way that one could easily believe it could have happened, the last book is rather over the top. It makes use of a historic person who seems like an unlikely witch, although it *would* explain her amazingly long life! I’d say four and a half stars out of five.

The above is an affiliate link. If you click through and buy something- anything- from Amazon- they will give me a few cents.